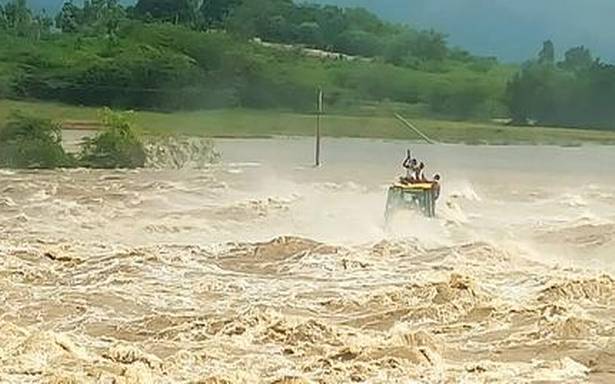 An Indian Air Force helicopter from Yelahanka in Bengaluru rescued 10 persons stranded in the middle of Chitravathi river, at Veldurthy village in Chennekothapalli mandal of Anantapur district, on Friday.

A car with four passengers was stuck in the middle of the river at 4 a.m. owing to heavy flow of water, and Dharmavaram Deputy Superintendent of Police Ramakanth took the help of a local earthmover and Fire Department personnel, and tried to rescue them by bringing them on to the earthmover.

As soon as the earthmover began its 250-metre journey back to the river bund, heavy inflows from the upper reaches made it impossible for it to move and it was on the verge of getting washed away. There were four passengers of the car, two Fire Department personnel and four other local swimmers along with the earthmover operator on the vehicle.

District Collector Nagalakshmi Selvarajan along with Superintendent of Police Fakkeerappa Kaginelli immediately contacted the DGP, and Rapthadu MLA Thopudurthi Prakash Reddy, who in turn got in touch with Chief Minister Y.S. Jagan Mohan Reddy for help. The Chief Minister got in touch with the Indian Navy officers at Visakhapatnam, but due to inclement weather and distance, the Indian Air Force at Yelahanka was contacted and a Mi-17-IV helicopter was for the rescue operation.

The helicopter reached the spot at 1.40 p.m. and took about an hour to rescue all the 10 persons stranded on the earthmover, which was shaking due to the ever-increasing force of the floodwater. While seven crew members of the IAF toiled hard to rescue the 10 persons, families of those stranded spent an anxious day on the shore and lustily cheered every time one person was lifted up into the chopper from the vvehicle.

Mr. Fakkeerappa said it was a satisfying joint operation as all the lives could be saved and thanked the IAF Yelahanka team for their timely help.