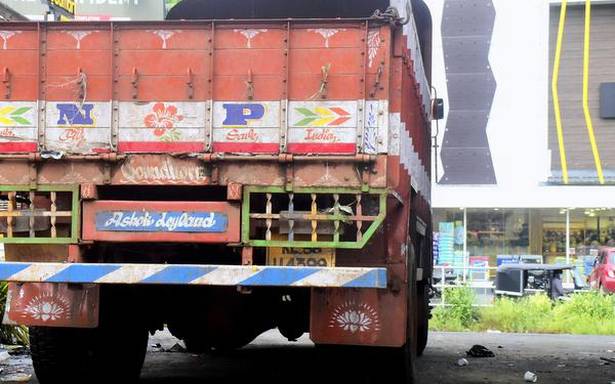 The illegal inter-State service of goods carriers fitted with poorly visible or misplaced number plates is yet to be checked effectively by enforcement squads. Owners of commercial vehicles in the district say illegible number plates are indicating the use of such vehicles for violation of road rules.

A truck driver from the city who was recently fined for overloading said the altered or misplaced number plate was one of the tricks adopted by inter-State drivers to evade surveillance cameras. “Speed-limit violation and hit-and-run incidents can never be tracked in the case of such vehicles,” he said.

The usual trickery is to use illegible fonts for number plates in small size in a crowded form. There are also drivers who cover a major portion of the number plate using large rear crash guards. Misleading alphabets and numbers are also common in such vehicles’ number plates.

According to Road Accident Action Forum leaders, a pedestrian or driver will never be able to read properly such number plates in the case of any road accident or road rule violations. There are also occasions when such vehicles are used for smuggling banned products and narcotic substances, they point out.

In some of the recent incidents, there were also attempts to evade the police using fake number plates. Both Kerala and other States’ registration numbers were used for printing fake number plates and displaying them in an insignificant way to smuggle ganja and foreign liquor. Apart from this, some of the violators were found using official stickers of various organisations to bypass flash inspections.

Meanwhile, officials attached to the Motor Vehicles Department and highway patrol squads claimed that they had already fined several Kerala and non-Kerala vehicles for using unclear number plates or their poor display. All local squads had been asked to intercept such vehicles and check documents thoroughly for permitting further journey, they said.