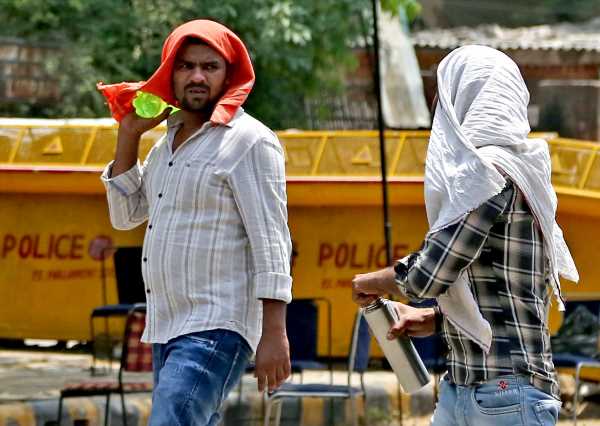 The ongoing heatwave sweeping through vast swathes of the country will intensify in the next five days, with the India meteorological department issuing an ‘orange’ alert for Rajasthan, Madhya Pradesh and parts of Maharashtra, and predicting a rise of another two degrees Celsius in northwest region.

“A rise of about two degrees Celsius in the maximum temperature (is) very likely over most parts of northwest India during the next two days and no significant change thereafter,” it said.

An orange alert has been issued for Rajasthan, Madhya Pradesh, and the Vidarbha region of Maharashtra for the next four days.

Temperatures may even leap to 47 degrees Celsius in parts of northwest India, weather experts said.

“A maximum temperature of 45 degrees Celsius is normal at places like Churu, Barmer, Bikaner, and Sri Ganganagar, but 45-46 degrees Celsius in the plains of north India by April end is quite unusual,” independent meteorologist Navdeep Dahiya said.

The IMD said the heatwave could lead to “moderate” health concerns for vulnerable people — infants, the elderly, and people with chronic diseases — in affected areas.

“Hence people of these regions should avoid heat exposure, wear lightweight and light-coloured cotton clothes and cover the head by hat, umbrella, etc.,” it said.

There is an increased likelihood of heat illness symptoms in people who are either exposed to the sun for a prolonged period or doing heavy work, an IMD advisory read.

“There’s a special need to monitor the old and vulnerable, just like we did during COVID-19 waves as they can develop heat strokes even when sitting at home,” he said.

Mavalankar said that cities should monitor all-cause mortality data daily along with data for hospital admissions and ambulance calls to compare it with the last five years of data to get a real indication of heat stress on mortality.

The early heatwaves have a higher rate of mortality since adaptation and preparedness is lower during the months of March and April, he said.

Large parts of India have been recording higher than normal temperatures since last week of March, with weather experts attributing it to the absence of periodic light rainfall and thundershowers, which typify this time of the year, due to the lack of active western disturbances.

Northwest India saw at least four western disturbances in March and April, but they were not strong enough to cause a significant change in weather, said Mahesh Palawat, Vice President (Meteorology and Climate Change), Skymet, a private weather forecasting agency.

The region did not see any significant pre-monsoon activity from March 1 to April 20 which compounded the severity of successive heatwave spells, he said, adding it had a ripple effect on central India, too.

Vidarbha in Maharashtra and west Rajasthan have consistently reported maximum temperatures in the range of 40 degrees Celsius to 45 degree Celsius for the past two months.

India saw its warmest March since the IMD began keeping records 122 years ago amid a 71 per cent rain deficit.

“And, having recorded three prolonged heatwave spells, it could be one of the hottest April in the history of the country,” Dahiya said.