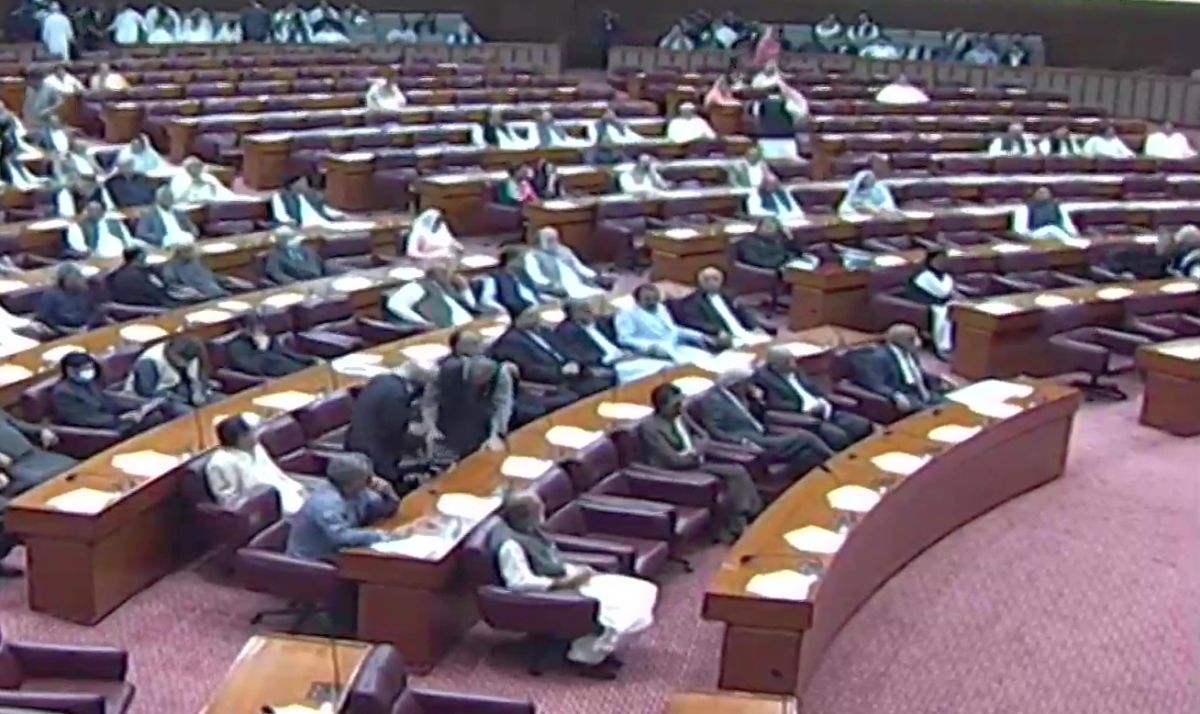 Pakistan’s Parliament on Saturday started its crucial session to take up the no-confidence resolution against defiant Prime Minister Imran Khan amid indications that the no-trust motion against him could be delayed after the government pressed for a discussion on the so-called “foreign conspiracy” against it.

In line with a landmark Supreme Court order, the National Assembly’s session began in the morning.

National Assembly Speaker Asad Qaiser is chairing the session which began at 10:30 am (local time).

Taking the floor, Leader of the Opposition in the National Assembly Shehbaz Sharif hailed Thursday as a historic day in Pakistan’s history when the Supreme Court rejected the deputy speaker’s ruling and said that the apex court’s decision had made the country’s future “bright”.

He called on Speaker Qaiser to conduct proceedings in accordance with the court’s directives, stating that Parliament would be writing history today.

“Today, parliament is going to defeat a selected prime minister in a constitutional manner,” he said.

Shehbaz told the Speaker to let bygones be bygones and to stand for the law and the Constitution, urging him to play his role and to have his name “written in history in golden words”.

“You must cash in on this moment with conviction and with your heart and your mind. Don’t go on the dictation of the selected prime minister,” he said.

Responding to Shehbaz, the Speaker assured him that he would conduct proceedings according to the law and the Constitution.

“(But) the important thing is that there has been talk of an international conspiracy. This should also be discussed,” he said, as the hall echoed with protests from the Opposition benches.

Taking the floor, Foreign Minister Shah Mahmood Qureshi said that the opposition had the right to table a no-trust motion against the prime minister, but asserted that defending it was his obligation.

“We intend to fight it in constitutional, political and democratic manner,” he asserted.

Talking about constitutional violations, he said that it was obligatory “on us to respect the Constitution”.

“As the prime minister said yesterday, he is disappointed but has accepted the court’s decision,” Qureshi said, referring to Khan’s address to nation on Friday night.

Speaker Asad Qaisar adjourned the session until 12.30 PM (local time) after slight disturbance between the treasury and opposition benches.

The Opposition parties need 172 members in the 342-member house to orchestrate the downfall of Prime Minister Khan.

They have garnered the support of more than the needed strength with the help of some allies of the ruling coalition and rebels from the Pakistan Tehreek-e-Insaf party of the 69-year-old cricketer-turned politician.

The ruling PTI party led by 69-year-old Khan has vowed to make things as difficult for the Opposition as they can, be it creating hurdles in the voting procedure or preventing the election of Opposition nominee Shehbaz as the new leader of the house, the Dawn newspaper reported.

According to Information Minister Fawad Chaudhry, the government will present the ‘threatening’ cable or its contents in the assembly and will ask the Speaker for a debate on the issue.

Speaking to ARY News on Friday night, he was of the opinion that even though the vote of no-confidence was on the NA agenda, voting would likely not take place on Saturday.

Chaudhry said that while the Supreme Court had instructed voting to be held in the session called on Saturday, that does not mean it will have to be on the same date, the report said.

There are indications that the government lawmakers may also resort to filibustering to prolong the session and avoid the crucial vote.

Khan, who faces the possibility of being the first premier in the country’s history to be voted out in a no-trust motion, in recent weeks has talked about a ‘threat letter’ and claimed that it was part of a foreign conspiracy to remove him as he was not acceptable for following an independent foreign policy.

He said that he has a great wish that people could see the document but he refused to share it due to national security. But he shares its gist in his own words.

In his latest address to the nation on Friday night, Khan repeated his allegations that a US diplomat threatened regime change in Pakistan.

In a landmark 5-0 verdict on Thursday, a five-member bench of the Supreme Court headed by Chief Justice Umar Ata Bandial ruled that NA deputy speaker Qasim Suri’s ruling rejecting a no-confidence motion against Khan was “contrary to the Constitution”.

The apex court also declared the advice by Prime Minister Khan to President Arif Alvi to dissolve the NA as “unconstitutional” and ordered the speaker of the lower house to call a session on Saturday to organise the no-confidence vote.

Prime Minister Khan, in an address to the nation ahead of the no-trust motion where he has little chances of surviving unless some miracle takes place, expressed disappointment over the Supreme Court’s verdict on the NA deputy speaker’s controversial decision on the rejection of the no-trust motion against him.

The cricketer-turned-politician, who has effectively lost the majority in the 342-member house, seemed to accept the writing on the wall and urged his supporters to stage peaceful protests across the country when the “new imported government” comes into power on Sunday.

No Pakistani prime minister has ever completed a full five-year term in office.

Meanwhile, the Opposition has completed its initial talks for the formation of a new government once Prime Minister Khan is ousted. Plans are afoot for the removal of President Alvi and the return of deposed premier Nawaz Sharif from the UK, The Express Tribune newspaper reported on Friday.

Shehbaz, 70, who is the Opposition’s candidate for the new prime minister, will announce his possible government priorities after taking the oath.

All Opposition parties will be given proportional representation in the new possible federal government.