‘He will be constrained if and when he tries to set the foreign policy agenda that is not to the liking of the army.’ 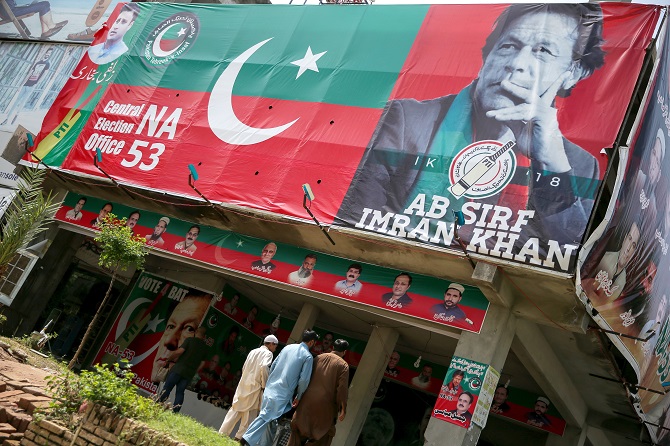 For the first time in Pakistan’s 70-year history, two successive civilian governments have completed their terms in office and a third is all set to assume power.

Not one Pakistan analyst has so far contested the claim that Pakistan Tehreek-e-Insaf chief Imran Khan has been catapulted to power largely with the army’s blessings.

As Pakistan was preparing for the election, Tilak Devasher, former special secretary in the Cabinet Secretariat and author, released his second book on Pakistan.

Devasher’s book Pakistan at the Helm provides fascinating insights into the lives and politics of leaders who have ruled Pakistan over the years: From Mohammad Ali Jinnah to Nawaz Sharif.

“Since he (Imran Khan) does not have a majority of his own and would be dependent on independents, it would be easy for the army to manipulate them and ensure that Imran does not cross any red lines,” Devasher tells Rediff.com‘s Utkarsh Mishra in an e-mail interview.

This would be the third consecutive civilian government in Pakistan, something that has never happened in its history.
Have the generals finally learnt their lesson from Ayub, Yahya Khan and Pervez Musharraf?
Or has it become easier to rule from behind the curtains?

As Pakistan’s polity evolves, the army too has become subtler in manipulating the levers of power.

They still don’t trust the politicians to do the right thing in matters that the army considers to be in the vital interests of Pakistan.

However, instead of openly taking on governance, the army finds it expedient to rule indirectly.

With no leader as strong as Nawaz Sharif or Benazir Bhutto, how likely is it that this government will complete its term?

Difficult to say as of now. Will have to wait and watch how Imran Khan governs and the policy options he chooses to exercise.

Since he does not have a majority of his own and would be dependent on independents, it would be easy for the army to manipulate them and ensure that Imran does not cross any red lines.

Though he is backed by the army is it likely that once in power, will Imran Khan feel constrained by the limited authority, the way Benazir felt during her first term?

A lot would depend on Imran himself.

In case he focuses on domestic issues like the economy, education, health and so on, he is unlikely to be constrained by the army.

He will be constrained if and when he tries to set the foreign policy agenda that is not to the liking of the army.

Even if not constrained by the army, will Imran not try to cut the strings attached to him just like Nawaz Sharif did?
Imran has issued statements against the army in a couple of interviews recently.

Nawaz started doing it after he felt he had a mandate of his own and that he no longer needed the army’s crutches.

At least initially, Imran is unlikely to cut the strings because he would be dependent on the army’s help to get a majority.

Over a period, Imran has changed his views about the Modi government. However, he has avoided endorsing terrorism in Kashmir so far. Will this change subsequently under pressure, like in Benazir’s case?
Or will he take the defeat the extremists suffered in polls as public opinion against meddling in Indian affairs?

I don’t think the two are directly connected. The main plank of the religious extremists was not anti-India or pro-Kashmir, though, of course, India-bashing is par for the course.

Hence, their rebuff at the hustings in terms of seats is not really indicative of a public opinion that is opposed to Pakistan’s Kashmir policy.

What would be interesting is to see the vote share of these parties.

You have written about how even elected PMs like Sharif and Benazir grew more and more dictatorial and intolerant of opposition over the time.
Given Imran’s detestation of the two main parties — the PML-N and the PPP — will he also follow the same path?

Yes, he will. The manner in which he distributed tickets for the elections clearly indicated his temperament in his own party.

His attitude towards the PML-N and PPP has been hostile.

Even discounting electoral rhetoric, tolerating the Opposition is not something that any politician relishes in Pakistan.

What would be the role of the United States now, given the Donald J Trump administration’s tough attitude towards the Pakistan military?
In case of a confrontation, will the US back the civilian government, unlike in the past?

I don’t think so. The US knows if they are to get anything done in Pakistan, they have to go to the army and not the civilian dispensation that continues to be weak.

Can it be said that it is this strained relationship with the US that is forcing the Pakistani army to conduct its business with a civilian government as a shield?

To an extent only. When it comes to the core national interests, the army is not likely to listen to the US as it has demonstrated in the past.

Today, due to the FATF (Financial Action Task Force) pressures, the army would make gestures of accommodation, but ultimately they will be just that — gestures. 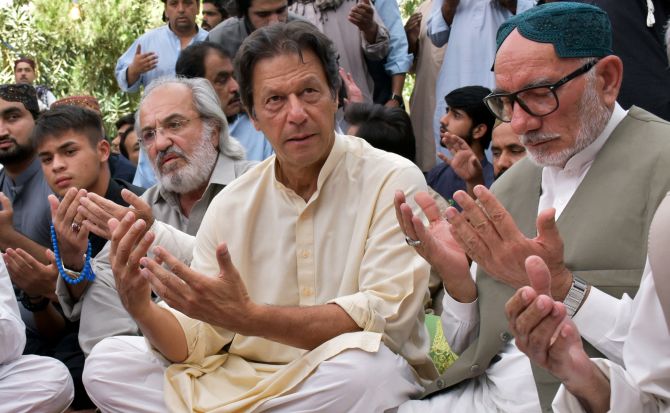 Zulfikar Ali Bhutto was one leader who dislodged not one but two military dictators from power and kept the army at bay.
However deceitful his designs might be, isn’t he the kind of leader Pakistan needs?
Imran has been praising Bhutto as the only strong leader who could resist the army.
Is it a sign of a lurking conflict?

Bhutto was able to dislodge Yahya Khan because the army had been decimated in the 1971 War with India and half the county had been lost. The circumstances were very different then.

However, even he did not put into place mechanics and procedures that could have whittled down the army’s influence.

If anything, he gave the army space by deploying it in Balochistan and crafting a political role for the ISI (Inter-Services Intelligence).

In the present circumstances, Imran would find it difficult to resist the army given its present strength and domination of the polity.

It will be a succession of civil governments that provide good governance that will ultimately be able to whittle down the army’s influence.

This, however, is not a realistic possibility in the near or medium term.

Why didn’t you include Liaquat Ali Khan in the list of leaders you have written about?

Liaquat Ali had too short a tenure and did not really move out of Jinnah’s shadow before he was assassinated.

You also write that the plan to infiltrate Kargil was shelved earlier on two occasions — during the regimes of Zia-ul Haq and Benazir Bhutto — with Musharraf being the DGMO (director general of military operations) in the latter case.
Given that information, Sharif’s side of the Kargil story, that he had no idea about the operation, seems stronger than that of Musharraf, that he had briefed Sharif about it.
It is more likely that Sharif was not told about the plan as Musharraf would have expected a Benazir-like reaction from him too.
Moreover, it was the handiwork of Musharraf only as he was associated with the plan for long. Would any other army chief have gone ahead with it?

I don’t think that Nawaz can be absolved of the blame for not putting a stop to the operation at least after the May (17, 1999) briefing (by the then director general of military operations), even if he was not aware of it fully before that.

Musharraf, by all accounts, was far more reckless than any other army chief.

You call Nawaz Sharif ‘a comeback kid’ in your book. But you also mention that in case of conviction in the corruption case — which eventually happened — his political career is all but over.
Will this ‘comeback kid’ be able to bounce back?
Or will we see a tussle for his legacy between his brother Shabaz Sharif and his daughter Maryam in the coming days?

As of now, Nawaz making a comeback this time seems very difficult. However, in politics, and especially in Pakistan, strange things can happen.

So while I would not write off Nawaz just yet, the road ahead for him is extremely tough. Apart from the judicial imbroglio, the army seems determined to keep him out.

Additionally, with the baton of leadership having been passed on to Shahbaz, it would be natural for him to foster his own nest and family (Hamza), making it difficult for Maryam to assume leadership in the future.

However, Shahbaz, too, has cases pending against him. So who knows?