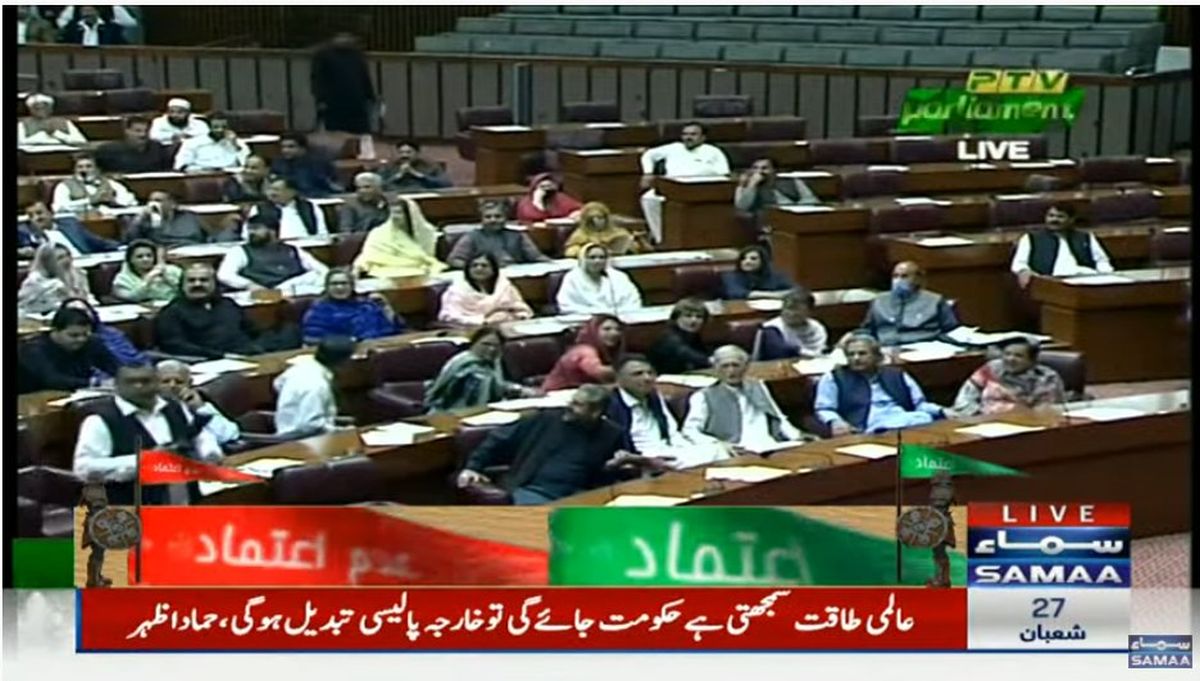 Pakistan’s National Assembly session was on Thursday adjourned abruptly till Sunday after opposition lawmakers demanded an immediate vote on a no-confidence motion against embattled Prime Minister Imran Khan who has effectively lost majority in the lower house. 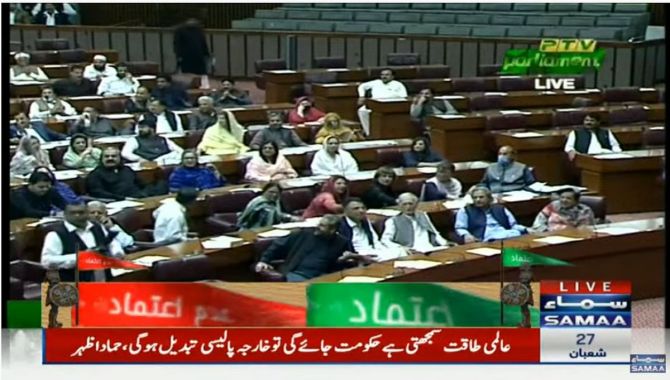 As soon as the National Assembly session began at the Parliament House, Deputy Speaker Qasim Suri asked lawmakers to discuss items listed on the agenda.

However, opposition lawmakers demanded an immediate vote on the no-confidence motion against Prime Minister Khan.

Deputy Speaker Suri then adjourned the House till 11 am on Sunday, amid vociferous protest from opposition lawmakers.

The resolution against the embattled premier was tabled by the Leader of the Opposition in the National Assembly Shehbaz Sharif on March 28 and it was approved for debate the very same day.

The assembly secretariat had earlier issued a 24-point agenda for Thursday’s session and the no-confidence motion was fourth on the agenda.

Opposition Leader in National Assembly Shehbaz Sharif had tabled the motion under Article A-95 of the Constitution, and it had 161 members as signatories.

While tabling the motion, Sharif had said he was presenting the no-confidence motion against prime minister Khan.

Voting is expected on April 3 and before the crucial day, the two sides would use the assembly forum to debate the matter.

The position of the opposition parties has strengthened after two main allies of the government, including Muttahida Qaumi Movement and Balochistan Awami Party, joined the front against the government.

The government lost its majority after the allies ditched it and pressure is mounting on the cricketer-turned-politician.

His ministers, however, have said that Khan would fight until “the last ball of the last over”.

Khan needs 172 votes in the lower house of 342 to foil the Opposition’s bid to topple him. However, Maulana Fazlur Rehman, chief of Jamiat Ulema-i-Islam Fazl (JUI-F), said that the Opposition has the support of 175 lawmakers and the prime minister should resign.

No Pakistani prime minister has ever completed a full five-year term in office. Also, no prime minister in Pakistan’s history has ever been ousted through a no-confidence motion, and Khan is the third premier to face the challenge.

On Tuesday, Prime Minister Khan strictly directed his party lawmakers to either abstain or not attend the National Assembly session on the day of voting on the no-confidence motion against him, which is likely to be held in the first week of April.

Khan came to power in 2018 with promises to create a ’Naya Pakistan’ but miserably failed to address the basic problem of keeping the prices of commodities in control, giving air to the sails of opposition ships to make war on his government.

His chances of survival are getting slimmer and the easiest way to end the uncertainty is to get back the support of all allies and win back dissidents within his own party.