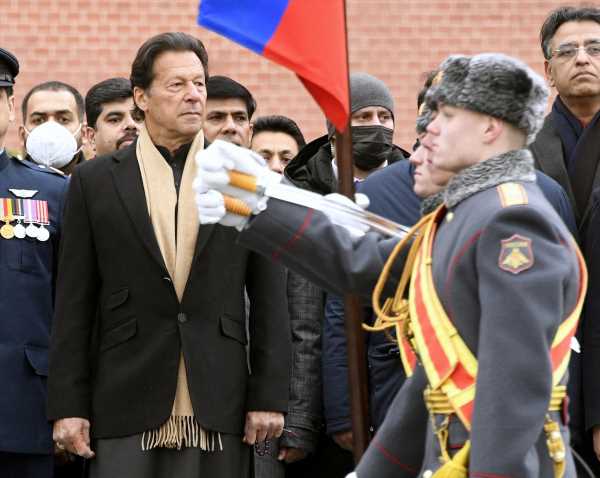 Nearly two dozen disgruntled lawmakers from Pakistan Prime Minister Imran Khan’s ruling party have openly threatened to vote against him on the no-confidence motion tabled in Parliament by the Opposition, in a fresh blow to the embattled premier struggling to cling to power.

Around 100 lawmakers from the Pakistan Muslim League-Nawaz and Pakistan Peoples Party submitted a no-confidence motion before the National Assembly Secretariat on March 8, alleging that the Pakistan Tehreek-e-Insaaf government led by Khan was responsible for the economic crisis and the spiralling inflation in the country.

The National Assembly session for the move is expected to be convened on March 21 and the voting is likely to be held on March 28.

After the no-trust move was submitted by the joint opposition, some of the partners in the government began to dither but the real shocker for Khan came on Thursday when it emerged that about 24 lawmakers from his own party were ready to part ways to join the push to topple his government.

Raja Riaz, one of the lawmakers, told Geo News that Khan had failed to control inflation while another lawmaker Noor Alam Khan told Samaa News that his multiple grievances were not addressed by the government.

“We are part of more than two dozen members who are not happy with the government policies,” Riaz said.

“I raised the issue of gas shortage in my constituency many times but nothing was done,” said Khan.

“I was threatened and requested the Sindh chief minister to give me a room here (Sindh House),” he was quoted as saying by the Dawn News.

The government accused the Sindh government of abducting the PTI lawmakers to influence them by offering them huge bribes.

But Riaz told Geo News that the lawmakers were staying at the property of their own free will and were ready to move out of it if the prime minister assured them that they would be allowed to vote ‘according to our conscience.’

Prime Minister Khan consulted his party leaders and ministers on Thursday and was urged by interior minister Sheikh Rashid to impose a governor’s rule in Sindh and remove its government as it was involved in buying members of the National Assembly.

“I asked the prime minister to impose governor rule in Sindh,” Rashid told the media after the meeting.

Khan is also consulting his legal team on how to disqualify the dissidents under the floor-crossing laws, but the law can be invoked after a lawmaker votes against his own party by ignoring the clear directions of the party leader.

As Khan’s grip on power weakens, he has mobilised his support base by giving a call for a big rally in the heart of the capital on March 27, with the objective of gathering one million workers.

The opposition parties responded to the move by asking their workers to march towards Islamabad on March 25 to occupy the D-Chowk in front of Parliament where Khan plans to hold a rally.

As the political drama unfolds, the powerful army is apparently viewing the scenes from the sidelines with many experts wondering about its final move.

Pakistan Army spokesman last week told the media that the military will remain neutral, to which Khan responded days after while addressing a rally in Khyber-Pakhtunkhwa by saying humans take sides and ‘only animals are neutral.’

The army did not respond to Khan’s barb, but many interpreted it as quite a predicament that Khan has got himself into after three and a half years of rule.

Khan, 69, is heading a coalition government and he can be removed if some of the partners decide to switch sides.

In the 342-member National Assembly, the Opposition needs 272 votes to remove Khan, the cricketer-turned-politician.

The PTI has 155 members in the House and needs at least 172 lawmakers on its side to remain in the government.

The party has the support of 23 members belonging to at least six political parties.

Khan’s PTI party came to power in 2018 and the next general election is scheduled to be held in 2023.