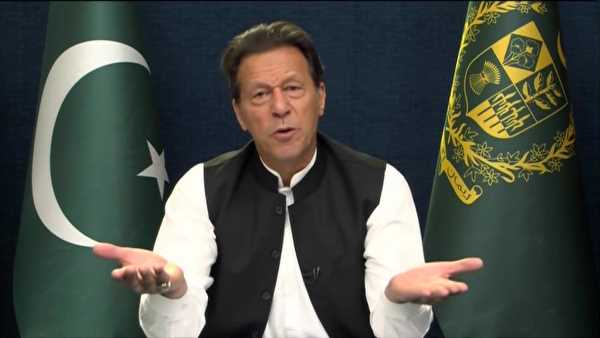 Hours before a no-confidence vote against him in Parliament, Pakistan Prime Minister Imran Khan on Friday seemed to accept the writing on the wall and urged his supporters to stage peaceful protests across the country when the “new imported government” comes into power on Sunday.

In an address to the nation ahead of the no-trust motion on Saturday where he has little chances of surviving unless some miracle occurs, 69-year-old Khan also expressed disappointment over the Supreme Court’s verdict on the National Assembly deputy speaker’s controversial decision on the rejection of no-trust motion against him.

“I will not accept this imported government, I will take to street.Only people can bring me to power and I will come back with the help of the people,” he said, adding that his supporters should come out on Sunday evening after the new government is expected to be set up.

He taunted the opposition to announce new elections and face the nation with him. “That is why I dissolved the assembly because I want people to elect the new government,” he said.

“I am ready for the struggle, join me in peaceful protest,” said Khan, who has effectively lost the majority in the 342-member house.

The opposition parties need 172 members in the 342-member house to orchestrate the downfall of Prime Minister Khan and already they showed the support of more than the needed strength.

Now Khan faces the possibility of being the first prime minister in Pakistan’s history to be voted out in a no-confidence motion.

In a landmark 5-0 verdict, a five-member bench headed by Chief Justice Umar Ata Bandial on Thursday unanimously struck down the deputy speaker’s ruling on the rejection of the no-confidence motion against Khan and ordered restoration of the National Assembly, saying the prime minister’s move to dissolve Parliament and call early elections was “unconstitutional”.

“I respect the Supreme Court and the judiciary, but the apex court should have looked at a threat letter before issuing its verdict,” Khan said in his address — perhaps last to the nation as the prime minister of the country.

“I am saddened by the verdict, but I accept it,” he said, adding that the apex court could have at least asked for and looked at the document because this is a very big issue and there was no discussion on it in the court.

Khan in recent weeks has talked about a ‘threat letter’ and claimed that it was part of a foreign conspiracy to remove him as he was not acceptable for following an independent foreign policy.

He said that he has a great wish that people could see the document but he refused to share it due to national security. But he shares its gist in his own words.

Khan repeated his allegations that a US diplomat threatened regime change in Pakistan.

He said that during the meeting between the Pakistani ambassador and the US official, the latter complained that “I [Imran Khan] should not have visited [Russia].”

“It is so shameful for the 220 million people of Pakistan that a foreign official is ordering the sitting prime minister of the country through a third person, warning of severe consequences and alluring them of forgiveness if I [Imran Khan] leave the office,” he said.

He then asked his people: “If we have to live like this, then why did we get freedom (from the British).”

He asked the people to come out and reject the foreign conspiracy to remove the government.

“If you are not standing up, no one will come to save you,” he said.

Khan once again lavished praise on India calling it a “nation with a great sense of honour.”

“No superpower can force India to do anything against its interests. They (India) are buying oil from Russia despite sanctions,” he said.

Khan also said he was not against India and had a lot of following in the neighbouring country. He said ties with India could not improve due to RSS factor and what they (India govt) did in Kashmir.

“Nobody can dictate India. What the European Union ambassadors said here, could they say that to India also?” he asked and added that they could not because India is a sovereign nation.

“I am not against anyone but first I will decide what is good for my people and I will look towards other people,” he said.

“Imran Khan is not against America, and I want to tell them that we want equal relations,” he said.

He also accused the media of getting money to portray the situation in a positive manner instead of condemning the lawmakers leaving the government.

He claimed that PML-N president Shehbaz Sharif started messaging the US when he said that ‘beggars can’t be choosers’ to show that he was ready to serve them (US).

Khan also told the people why he was not acceptable to the West.

“My entire profile is with them (US) because they know me for the last many years because I opposed drone attacks and war on terror. I don’t have money stashed abroad,” he said.

“This entire drama is to remove one man,” he said.

He said that after removal of his government, whosoever will come to power will remain in fear that the government can be sent home after spending money.

Khan’s address came after his nomination of Lt Gen (retd) Tariq Khan to head a government commission to probe the “threat letter” to remove the government fell apart after the general refused to lead it.

No Pakistani prime minister has ever completed a full five-year term in office.