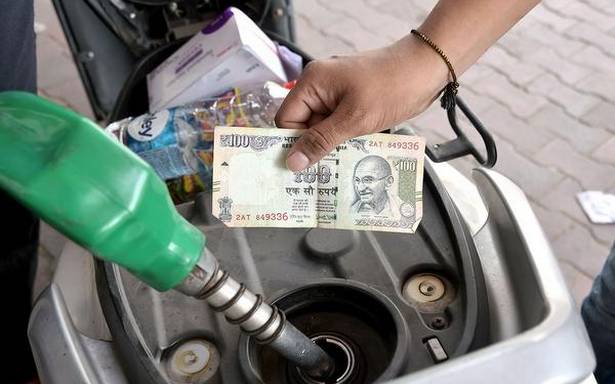 On Thursday, oil companies hiked the fuel price yet again, the 17th time in a little over a month. The price was hiked by 26 paise for petrol and 8 paise for diesel in Kerala

The price of regular patrol per litre in Kerala is inching closer to the century mark, while the premium-grade petrol has already breached it.

On Thursday, oil companies hiked the fuel price yet again, the 17th time in a little over a month. The price was hiked by 26 paise for petrol and 8 paise for diesel.

The price of petrol and diesel rose by ₹4.55 and ₹4.45 respectively in just a month, with an average price hike of between 23 and 30 paise every alternate day.

“The price in Ernakulam is considered the base price for fuel in the State since it houses the Kochi Refinery from where it is transported across the State. The price across Kerala will vary depending on the transportation costs from Ernakulam. At this rate, the price of regular petrol may cross ₹100 in a week,” said R. Sabarinath, national vice-president, Federation of All India Petroleum Traders.

He shot down reports in a section of the media giving the impression that the price of regular petrol per litre has already hit the century mark. “Even after taking into account the transportation cost, regular petrol is yet to touch the mark compared to the premium petrol that is priced ₹2 to ₹4 more. Premium petrol accounts for a negligible portion of the total sale,” said Mr. Sabarinath.

The fuel consumption, which dropped to around 25% since the lockdown, has risen to nearly 70% of the normal consumption since the unlock.

“However, diesel consumption was still hovering around 30% as inter-district movement, especially that of heavy and transport vehicle, remains to be restored,” said Radhakrishnan Meleth, patron, All Kerala Federation of Petroleum Traders.

No drop in consumption

Mr. Sabarinath said that the frequent rise in fuel price hasn’t led to a drop in consumption. “One set of buyers never increases the fuel intake irrespective of the change in price, while another category increases the volume notwithstanding their agitation. Between them, they kind of balance our sales,” he said.