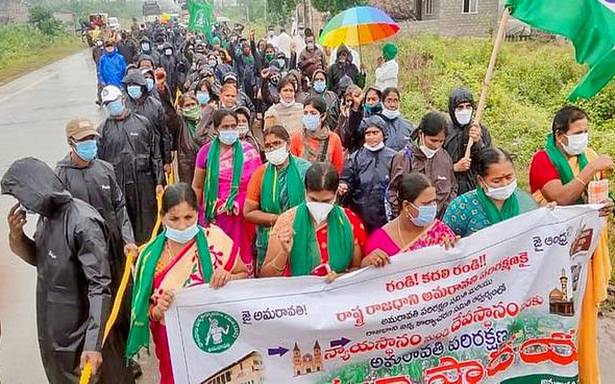 Jubilant Amaravati farmers welcomed the Bharatiya Janata Party’s decision to take part in their “court to temple Mahapadayatra” to Tirumala, which was suspended for the day following heavy rain in Prakasam district on Thursday.

Now the farmers expect the BJP-led government at the Centre to submit an affidavit making its stand clear as and when sought by the Andhra Pradesh High Court, which is hearing the case relating to Capital Region Development Authority Repeal Act, he said.

With this, all major opposition parties, including the BJP‘s ally Jana Sena Party, Telugu Desam Party, Communist Party of India and the CPI(Marxist), had backed the farmers stir to exert pressure on the YSR Congress Party to scrap its three-capital policy.

The BJP’s decision followed a reported direction from Union Home Minister Amit Shah to the party rank and file to take a plunge into the farmers’ movement for retaining Amaravati as the sole capital of Andhra Pradesh. Though the saffron party was sympathetic to the farmers’ cause, the party adopted a wait-and-watch approach as the matter was sub-judice, party sources said.

The farmers, who have been taking part in the “Nyayasthanam to Devasthanam Mahapadayatra” from Amaravati braving intermittent rain in the last few days, decided to cancel their march at least for a day as the showers turned sharper on Thursday. “We will review the situation later on whether to continue the march or not on Friday’” Mr. Rao said.

Meanwhile, Andhra Pradesh Congress Committee vice-president Sripathy Prakasam urged the NDA Government at the Centre to give a direction to the State to construct the capital only at Amaravati. The prestige was at stake for the Centre as it was Prime Minister Narendra Modi who had laid the foundation stone for a world-class riverfront capital at Amaravati and promised a capital rivalling the national capital. There won’t be any need for the BJP to take to agitations if the Centre intervened swiftly, he added.