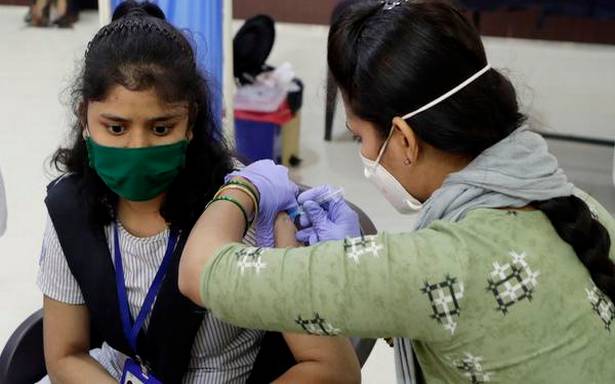 These include 3,007 cases of the Omicron variant

India reported over a lakh new cases of COVID-19 yet again in a single day. Its tally of 1,17,100 new cases on Friday has taken the total so far to 3,52,26,386. This includes 3,007 cases of Omicron reported across 27 States and Union Territories, according to the Union Health Ministry data updated on Friday.

Out of the total Omicron cases reported so far, 1,199 people have recovered or migrated.

Active cases increased to 3,71,363, the highest in around 120 days, according to the data updated at 8 a.m. The active cases comprise 1.05% of the total infections.

A day after calling off its flagship Vibrant Gujarat Summit, the Gujarat government on Friday announced a series of measures to tackle the surging pandemic as the active load in the State reached 18,538. On Friday, the State reported 5396 new cases and one death.

The new measures imposed by the authorities include closing of schools for classes 1 to 9 completely till January 31, and increasing the duration of night curfew from 10 p.m. to 6 a.m. in all major cities in the State.

Chief Minister Bhupendra Patel held a review meeting with top Ministers and bureaucrats to take stock of the situation and directed the administration to ramp up testing and containment measures in places where the cases are being reported.

The test positivity rate stands at 4.15%. The cumulative number of Omicron cases reported in the State so far is 333. The State now has 30,113 active patients.

In Telangana, 2,295 new COVID-19 cases were reported on Friday. The Greater Hyderabad Municipal Corporation alone accounted for 1,452 of them. Three deaths were also reported on the day.

Odisha maintained a spike in new COVID-19 cases for the fourth consecutive day, the graph shooting up by 42.48% in the past 24 hours. The State logged 2,703 new cases, the biggest single-day tally in the past six months

The surge in cases had prompted the State government to order the closure of offline classes in all colleges and universities from January 10. The ancient Shree Jagannath Temple, Puri will remain closed for devotees from January 10 to 31 on account of many temple staff testing positive in the past few days.

The State’s active case pool is now seen rising steadily in the past one week and it now has 27,859 patients, of whom 2,434 are being treated for moderate or severe infection in hospitals

There was a 45% increase in new cases (7,348 cases) in the week from December 31 to January 6, in comparison to the previous week, while there was a marginal increase in hospitalisation (5%) and ICU admissions (8%).

Assam reported 1,167 new cases on Friday after 35,127 people were tested in the past 24 hours. Two deaths were also reported. The State’s active case pool is 3,601 at present.

As per the State Health department, no new infections of the Omicron variant were reported on Friday. The State’s Omicron tally now stands at 876, of whom 435 have been discharged till now.

However, despite the rising cases, Mumbai Municipal Commissioner Iqbal Chahal ruled out any immediate need for either imposing a lockdown or additional restrictions in the city as the bed occupancy rate, oxygen requirement and number of fatalities were still low.

He said that while during the first and second waves the decision to impose a lockdown was taken on the basis of the case positivity rate, this criterion could not be applied for the third wave.