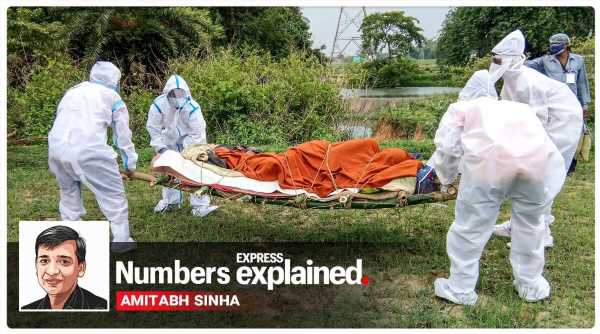 India Covid-19 numbers explained: So far, over 3.59 lakh coronavirus-infected people are known to have died in India. India coronavirus numbers explained: The addition of close to 4,000 previously uncounted deaths in Bihar on Wednesday saw India reporting the highest number of coronavirus-related deaths on any day since the beginning of the pandemic last year.

A total of 6,148 deaths were reported on Wednesday, but only because Bihar added 3,951 deaths that were previously not accounted for. It wasn’t clear in what time period these deaths had happened in Bihar, but this is the first time that the state has carried out a data cleaning exercise. So, it is possible that some of the deaths included on Wednesday are from last year as well. States like Maharashtra do a similar exercise fairly regularly, at the end of every month. Even in their daily counts, a large number of deaths are from previous two to three weeks.

With Wednesday’s addition, Bihar’s total death count has jumped to 9,429, the 12th highest in the country. The deaths that were included on Wednesday were earlier being considered to have recovered. That is why their inclusion in the dead brought down the recovery numbers in the state. The daily recovery number for the state on Wednesday actually went in the negative because of this adjustment.

Bihar’s addition has had very little impact on the overall case fatality rate of the country, which moved up from 1.22 per cent to 1.23 per cent on Wednesday. But Bihar’s own CFR saw a jump of more than half a percentage point, from 0.76 per cent to 1.32 per cent.

Discounting for Bihar’s addition, 2,197 deaths were reported on Wednesday from across the country. This is in keeping with the decreasing trend of death count in the last couple of weeks.

So far, over 3.59 lakh coronavirus-infected people are known to have died in India. Another about 3,000 deaths of coronavirus positive people, mainly in Maharashtra, have been assessed to have been caused by associated co-morbid conditions. Close to two lakh deaths have happened since April, at the height of second wave of infections. 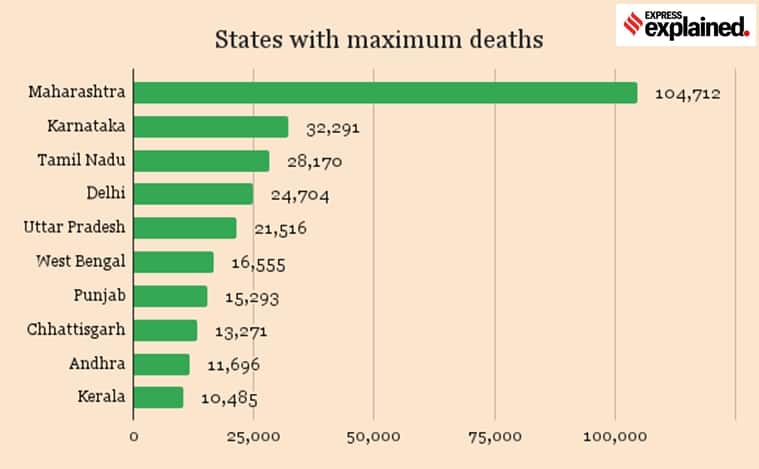 Meanwhile, the overall situation continues to improve rapidly. The daily case count has now remained below one lakh for the last three days. On Wednesday, 94,052 new cases were discovered in India, with Tamil Nadu contributing the highest number, over 17,000 cases. Kerala, Maharashtra and Karnataka are the other states that are contributing over 10,000 cases in a day. These states, along with Andhra Pradesh, which has been reporting around 8,000 cases a day, together accounted for over 64,000 cases on Wednesday or almost 70 per cent of all the cases recorded in the country.