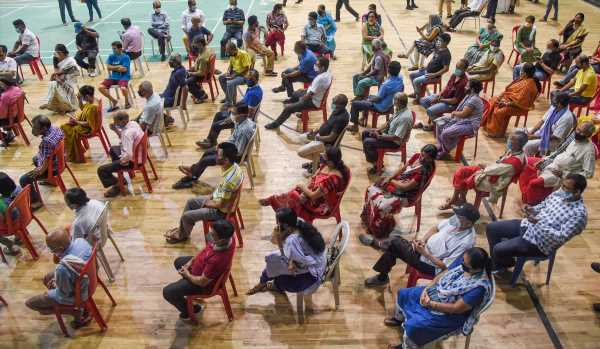 Winning against Covid means thinking ahead, at least six months, putting in place the likely scenarios of what might happen, and then planning.
Planning is the role of the government. Having planned, it should communicate what and why.
Then, get out of the way, recommends Naushad Forbes.

I am tired of writing about Covid.

But I am much more tired of Covid itself.

We need a plan to get ahead of the infection curve, addressing both the immediate and medium-term needs.

We have seen a huge surge in infections in Maharashtra, and around the country.

We could see it coming.

Let me give you two data points.

In our own organisation, we saw the number of active infections rise four times between February 15 and March 15.

All of the increase could be traced to either attendance at a wedding, or direct contact with someone who had attended a wedding.

And 190 students at IIM-Ahmedabad apparently tested positive after a few of them joined tens of thousands of cricket fans to cheer India at the Narendra Modi stadium last month. All so unnecessary, but we are where we are.

So what must we do?

Our immediate challenge is the health capacity to address the surge.

This means hospitals rededicated to Covid, and supplies of oxygen and the necessary drugs.

The second immediate task is to end all gatherings of more than half a dozen people now. Now means now, it does not mean after the West Bengal election and the Kumbh Mela.

It is an absurdly dangerous act of irresponsibility to allow hundreds of thousands of mask-less people to gather in one place. The fact that this folly is bipartisan only makes it doubly irresponsible.

Each state will cope as best it can. One can only hope that sensible enforcement of the norms on gatherings, social distancing and public mask-wearing outweigh knee-jerk reactions of curfews and lockdowns. The virus does not seem to take note of curfews.

But our task must be to think at least six months into the future.

How do we ensure that the effect of the next wave is greatly mitigated, or even eliminated?

Vaccination, norms of social behaviour and science must support each other.

Our second wave is particularly depressing because we have inadequately handled all three.

When cases began falling across the country from October onwards, there was much triumphalism going around. As late as last month, politicians and journalists were praising the Indian model of defeating Covid.

My big concern was that no one seemed particularly interested in knowing scientifically why the cases had fallen.

So today, no one can explain this surge.

Yes, people in Maharashtra were undisciplined, but were they more so than the rest of the country?

How much of the increase is being driven by new strains of the virus?

We should be routinely sequencing on a massive scale so we know what we are fighting.

We have completely squandered our pole position as the world’s largest manufacturer of vaccines.

In January 2021, India approved its first vaccines for use.

The Ken Nutgraf tells us that between July 2020 (before any vaccines had passed testing) and January 2021, the US ordered (and paid for) over 600 million doses.

That’s for a total population of 300 million.

In the same period, India ordered 11 million doses, for a country of 1,300 million.

Three months later, we have still not placed orders to cover our population.

What is our plan for every adult in India to receive their vaccine?

In my article We must vaccinate 140 million people a month, I suggested we target completion by October.

This requires supply of 7 million doses a day by June.

I have heard of no plan, nor any date by when India can reasonably expect to be vaccinated.

As the Union health ministry does not seem able to cope, let others get on with the job of coordinating with vaccine manufacturers, approving more vaccines, and placing orders so each supplier has certainty of demand.

Let’s be clear: We must place orders of at least 1.7 billion doses of vaccines, to cover two doses for every adult. And pay for them.

Before you say that the US is a rich country, and we are poor, let me remind you that we have allocated Rs 35,000 crore (Rs 350 billion) for vaccines in this year’s Budget, enough for every adult.

So the cost is tiny relative to the economic output we forgo by having to restrict economic activity as we try to control the spread of infection.

Finally, until fresh infections fall to negligible levels of a handful a day, we will have to continue with the right social behaviour.

This means wearing masks and social distancing for the next six months with no letting up.

And that means no large gatherings, whether political, religious, social or business.

We have to defeat Covid before life can fully return to normal.

In the meanwhile, we have to preserve as much economic activity as we can.

All logistics, manufacturing and sales (e-commerce and retail) must continue with social-distancing protocols strictly followed.

Cricket matches without spectators, religious observance in private or socially-distanced, and the opening of restaurants in sync with lower local infection rates.

With education opening up well before entertainment.

This last year has been our most uncertain on record. We are coping with simultaneous challenges of health, curfews, and general disruption..

Government must remember it is not in the suspense business, adding to the uncertainty with sudden decision-making and surprise announcements.

In our organisation, a daily catching-up call cascades down the organisation, five or six times a week. This builds transparency of what we are doing, and accountability of us as managers.

Our Union and state governments need to be similarly transparent and accountable, explaining why we decided what we did, and what people can expect depending on how things go.

And if something goes wrong, explain the mistake, don’t vanish from sight for months.

This may not be how our government is used to operating, but it would be a refreshing change.

Last week’s notification from the Maharashtra government is a welcome approach, and in the right direction.

Winning against Covid means thinking ahead, at least six months, putting in place the likely scenarios of what might happen, and then planning.

Planning the health care infrastructure, the strain sequencing, the vaccination effort, and the social behaviour demands.

Planning is the role of the government.

Having planned, it should communicate what and why.

Then, get out of the way and let India proceed with the job of getting ahead of the infection curve to defeat Covid.

Naushad Forbes is co-chairman Forbes Marshall, past president CII, chairman of Centre for Technology Innovation and Economic Research and Ananta Aspen Centre.
You can read his earlier columns here.