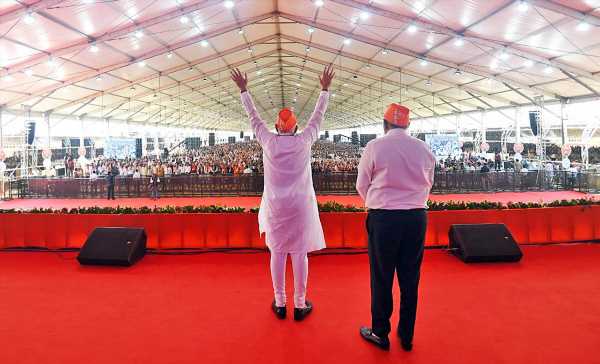 ‘The most important priority for the next 25 years should be to strengthen our democracy so that it is supportive of social harmony, and to not just respect but to take pride in the diversity of Indian society in terms of the variety of languages, religion and religious practices and social norms,’ explains Nitin Desai.

The prime minister in his Independence Day speech spoke about the priorities for the next 25 years leading up to the centenary of independence.

He focussed on five things — an India that becomes a developed country, that is free of a colonial mindset, that is proud of its heritage, that is united and integrated and whose citizens place duty above rights.

Out of the five priorities, at least two are about transforming our cultural future.

The only reference to our political future is the emphasis on citizen’s duties rather than rights.

What is disturbing is the absence of any reference to the nurturing of democracy, or to social harmony and respect for diversity of religion and language.

Several recent indications show that India’s democracy is considered to be in danger, not just by outside observers but also by India’s population.

India Today‘s Mood of the Nation survey released recently showed that 48 per cent of the respondents thought democracy in India was in danger and only 37 per cent said it was not.

A broader analysis of India’s democracy is presented in the latest report of the Varieties of Democracy Project prepared in the University of Gothenburg1 a well-researched annual study that is quite influential in shaping global opinion.

This study rates democracies in the 0 to 1 range.

The concern about the present status of India’s democracy arises because the index has dropped steadily from 0.67 in 2014 to 0.41-0.44 in 2020 and 2021, a level comparable to the index during the mid-seventies Emergency, which could get worse if ruthless majoritarianism continues to grow.

India is now classified as an electoral autocracy, a sad outcome for a democracy that has been our source of pride.

A vibrant democracy, with greater restraint in the use of police powers particularly against political opponents, respect for the Opposition as potential equals, absence of vigilante violence, genuine freedom of expression and vigorous protection of Sonstitutional rights, is vital for the other two dimensions of importance missing from the PM’s five-point priorities for the next 25 years — social harmony and respect for diversity.

India is a hugely diverse country even when it comes to elites.

The northwest is dominated by Sikhs and Jats, the north-east by many tribal groups of Mongoloid or Austric origins with Christianity as their base religion, the south by Dravidian elites with their own unique ancient culture, the eastern regions with Bengali and Odiya bhadralok, the west by Marathas and Patidars and one can go on, listing the large variety of elites in different parts of the country.

But a democracy is not just about elites. It also involves those who are not today a part of the elite, but are its equal in a democracy.

Because of the long-standing caste system and the multiplicity of religions, even at a local level social systems are complex and diverse.

It is this social diversity that underlies the wide variety of cultures that India hosts, a diversity that has been — and will always be — its defining characteristic.

Besides this respect for social and cultural diversity, Union government policies must also take into account the diversity of the economic base in different parts of the country.

For instance, agricultural marketing policies for Kerala, with its many plantations and the north-east cannot be the same as for Punjab and Haryana.

For all of these reasons, the most important priority for the next 25 years should be to strengthen our democracy so that it is supportive of social harmony, and to not just respect but to take pride in the diversity of Indian society in terms of the variety of languages, religion and religious practices and social norms.

The prime minister’s five-point agenda includes one that is connected with the concerns expressed here and that is that India should be united and integrated.

This will be threatened if the erosion of democracy continues, if opposition parties are threatened with police power, and if diversity is not respected on the grounds of national integration.

Other grounds for concern about national integration should also have figured in the priority list for the next 25 years.

This is the need to close the growing gap in per capita income between the states.

A large proportion of the fruits of liberalisation have accrued to the western, southern and north-western states.

This absence of convergence is particularly important if one includes, as one should, employment generation as a key priority because close to 90 per cent of the increase in the number of people in the working age between now and the 100th year of independence will take place in the populous northern states.

This will require not just investment management but a focus on human resource development, particularly in the slow growth states, focusing on the quality of education and health care.

There is much more one would have liked to see in the articulation of priorities for the next 25 years, including India’s links with the changing trends of globalisation, technology development, a promising environment for small start-ups and so on.

These are necessary if India is to attain the stated goal of becoming a developed state.

Substantial changes in these areas to release the potential of the skills and entrepreneurial capacity of India matter far more to attain developed country status than simplistic gross domestic product growth targets.

We must also be ready to accept that the path to becoming a developed state will not be smooth always.

The prime minister described the next 25 years as Amrit Kaal, a term, probably drawn from what in astrology are the division of the day into 16 segments which fall into one of seven categories — three are positive (the main positive one is called Amrit), three are negative and one is neutral.

Hence, we must also assume that the entire 25 years ahead will not be Amrit Kaal and there will be episodes which are more mildly positive and others that are negative.

Any strategy for the future must be ready for both.