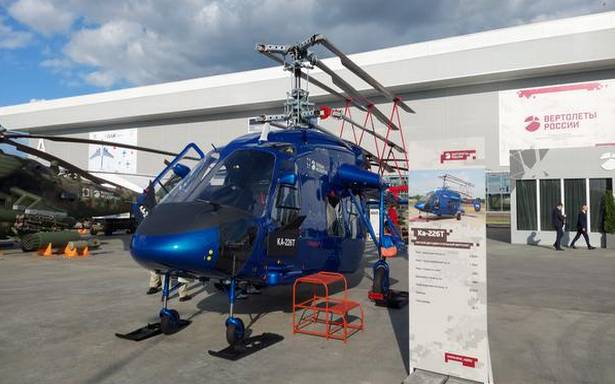 Move for off-the-shelf buys comes amid delays in joint manufacturing of rifles, helicopters in India

“The deal for the 70,000 rifles has been signed but the first payment is yet to be made. The deliveries would begin within three months once the first payment is made and be completed in six months,” officials from India and Russia confirmed. On the Ka-226T “Climber”, as the upgraded version is referred to, an official from Russian Helicopters said the redesigned helicopter has improved flight and technical characteristics.

The Army is looking at procuring over 7.5 lakh AK-203 rifles and the two countries had signed an Inter-Governmental Agreement (IGA) in February 2019 following which a joint enture — Indo-Russian Rifles Private Limited (IRRPL) — was set up at Korwa in Uttar Pradesh for manufacturing the rifles.

The JV is between between Ordnance Factory Board (OFB) from the Indian side and Rosoboron Exports and Kalashnikov on the Russian side. The Army had also appointed a Major General as the Chief Executive Officer (CEO) of IRRPL to ensure timely execution and deliveries.

The Ministry of Defence has already floated a Request For Proposal (RFP) to the JV for the supply of 6.71 lakh rifles but the final deal has been held up over the high cost quoted.

In the Ka-226T helicopter, there are two major changes which include change in hull from composites to aluminum and change in avionics apart from several minor upgrades, said Vasily Grydin, deputy head of commercial department, Russian Helicopters at the Army 2021 expo which began on Sunday.

“Major upgrades were done in the hull and the avionics to make the helicopter lighter and improve its capability. Some of the modifications were done based on the request of the customer (India),” Mr. Grydin said. These changes were done in the last one year while talks continue between the two sides for the final deal, he stated.

There is an upgrade in avionics and there is an option where the helicopter can be operated by one pilot if required, Mr. Grydin explained.

On the change in the hull, he said it was made stronger by using aluminum in the place of composites which was done for the sake of the exhaust and the helicopter has become 15% lighter. Dust filters have also been introduced for the purpose of high altitude operations while the fuel tank has also been redesigned.

Another major change is improved design of gear box which can work twice longer, he added.

In 2015, India and Russia had concluded an Inter-Governmental Agreement (IGA) for at least 200 Ka-226T twin-engine utility helicopters estimated to cost over $1 billion.

Sixty helicopters were to be directly imported and remaining 140 manufactured locally by a JV, India Russia Helicopters Limited, set up between Hindustan Aeronautics Limited and Russian Helicopters.

However, the deal has been held up over the percentage of indigenous content which as per the RFP should reach 70% in phases. Due to this, the Army, which is in urgent need of replacing the ageing Cheetah and Chetak helicopters, has approached Defence Ministry to procure a limited number of helicopters immediately.

The first helicopter would be delivered within 36 months from the signing of the contract and order completed in eight years.