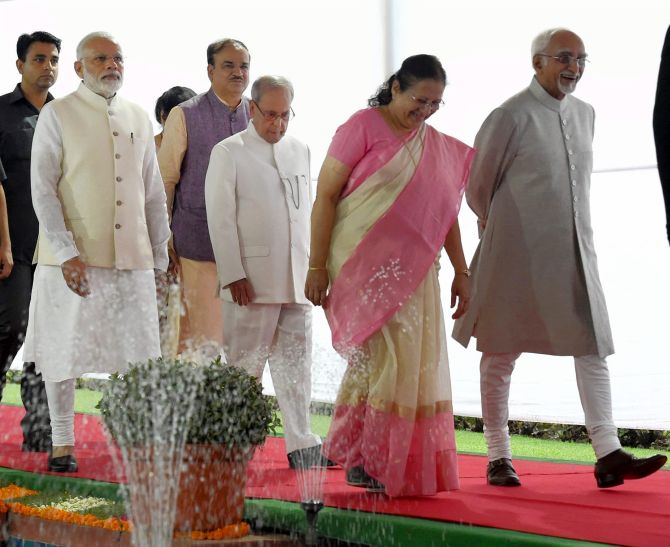 ‘We are a plural society that for centuries, not for 70 years, has lived in a certain ambience of acceptance.’
‘It is under threat,’ outgoing Vice President Hamid Ansari tells Karan Thapar. 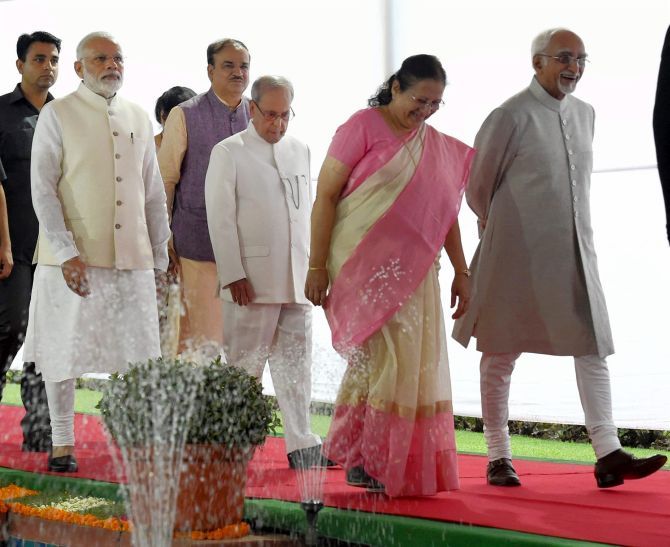 He’s held the job for 10 years — no one has held it longer — and only one of his predecessors Sarvapalli Radhakrishnan has held it for as long.

Before he became Vice President Mr Ansari was India’s ambassador to Afghanistan and Iran, to Saudi Arabia and the United Arab Emirates.

He was also high commissioner to Australia as well as India’s permanent representative to the United Nations in New York.

Mr Ansari has also been chairman of the National Commission for Minorities as well as vice chancellor of Aligarh Muslim University.

In this exclusive interview with Karan Thapar, Mr Ansari looks back on his career, and in particular, on his 10 years as vice president as well as the chairmanship of the Rajya Sabha that went with that job.

The first of a multi-part interview:

Mr Vice President, let me start with a rather unusual question — you were born on April Fool’s day in 1937. Is that the secret of your success?

Well most of my life I got away without having to give a birthday party.

And that tradition was broken only in my first birthday in this House, when a message came in the morning that Dr and Mrs Manmohan Singh would wish to come and wish you happy birthday. I couldn’t say no to that!

Well, I said right in the beginning that every citizen is in a sense, a political creature. But being in the thick of things was a new experience, a novel experience.

Did the protocol, did the prestige become inhibiting for someone who was quite a free bird?
Or was it something that you were to accustomed to as a high commissioner and as an ambassador?

Well, yes but it was a different kind of constraint which one went through as the representative of the country.

This was a different kind of thing — there were constraints on movement and things like that for understandable reasons.

One had to live with it.

Was it exciting and fun or was it at times intimidating and restrictive as well?

Well, not intimidating, but restrictive — yes!

In other words, you couldn’t do half the things that you would have liked to do because your position simply didn’t permit it.

And a couple of other things that I suppose, we shouldn’t mention…Let me put it like this, as Vice President you’ve had this unique and privileged vantage point to look at the functioning of the Indian political system.
This is also the 70th year of our Independence — has our political system functioned effectively and smoothly?
Or is it often dysfunctional and perhaps disruptive?

It is both. It has been both.

Two things have happened. Over a period of 70 years, democracy has deepened in the country.

There’s much greater voter participation, much greater public interest in what is happening in the political field.

On the other hand, the functioning of political institutions in the country at various levels, is not at its best.

And is that because of an individual responsibility, presumably it must be?

So, has the quality of the people who man institutions deteriorated, as the institutions themselves have become more established?

No, the quality has not deteriorated, but the mannerisms have changed.

I mean, you could not imagine, for example, in the early mid 50s or even in the 60s, disruptions of the kind that take place in the House today.

I want very much to talk to you about the functioning of the Upper House and your role as Chairman of the Rajya Sabha, but I’ll come to that in a moment’s time.
Let us first talk about your experiences as Vice President.
You served as Vice President under two very different Presidents — Pratibha Patil for five years and Pranab Mukherjee for five.
How did they compare with each other?

No, that wouldn’t be a fair thing to do.

I think each individual as the head of the Republic, has his or her own way of doing things.

And, frankly speaking, the Vice President has only a kind of ceremonial relationship with the Presidentship of the country.

In other words, you have to fit in where there is room?

Yes… I mean there are a lot of ceremonial functions in which you are together — you are invited to Rashtrapati Bhavan — I would go and periodically chat with the Presidents on matters of interest or general matters.

Did you find that your role as Vice President changed because of the nature of character of the President who was present?

With President Mukherjee one could go over the whole history of modern Indian democracy.

With Pratibhaji, it was a different kind of conversation.

Because their personalities and their interests were different?

You also have served for just over two weeks with the new President — President Kovind.
How has he started? What sort of start has he had?

Well, I had the benefit of knowing President Kovind before he became President. Because as governor of Bihar, there were several occasions in which I visited Patna and we had good conversations.

Is he an easy person to get on with?

So there was a relationship with him, that in a sense, you might not have had with Pratibha Patil and Pranab Mukherjee, because you knew him before he became President.

I was PR (Permanent Representative) in New York when he came as a minister of external affairs.

And these friendships, these relationships make a difference to the role?

You were also Vice President between two very different prime ministerships.
There was Manmohan Singh to begin with and Narendra Modi thereafter. Both men, we all know, are very different.
Are there senses in which they are similar, which you may be aware of, but the audience perhaps doesn’t know?

I think that would require a little time to dilate on.

Because you can’t say…

Because the personalities are very different.

Personalities are obvious to everyone, I don’t have to talk about it.

Does the Vice President have a fairly close relationship with the prime minister of the day? Or is it a very formal one?

It’s most of the time a formal relationship, but there are occasions when there are very serious conversations.

You mentioned that on your first birthday as Vice President Dr Manmohan Singh and his wife came over to wish you. I imagine you’ve had three birthdays after Mr Modi took over.
Has Mr Modi been to wish you regularly?

Eh, regularly yes. I think the last occasion he was away, he sent a message. But first two occasions, yes.

Now one of the things that have happened and attracted enormous attention because, it is something that has never happened before, was in 2015 when a senior leader of the BJP — he was general secretary then, he still is general secretary now — Ram Madhav tweeted in public criticising your behaviour as Vice President.
He said that you had deliberately not participated in Yoga Day functions in that year and he also added that Rajya Sabha TV which falls under your charge hadn’t covered the event.
Now, I know that Mr Madhav both apologised and deleted the tweets, but as I said that never before has the general secretary of a ruling party publically questioned, leave aside criticise the Vice President.
Were you surprised and taken aback by that?

Surprised yes because the facts were well known and very clear and there were my colleagues in office who put the public wise to it very quickly.

Were you upset that this had happened?

Because it was a breach of protocols to say the least?

Well yes, but protocol is breached from time to time.

Did you take up the matter with the prime minister?

So, in other words you deliberately and consciously chose to forget it and let it go?

Not forget. It was absurd to begin with and I left it at that.

Let’s not talk about that.

Something else that you did when you were Vice President was to travel extensively in Africa.
In the last five years alone you have travelled to ten different countries.
Many of those visits happened at a time when the number of attacks on Africans in India was steadily growing and each attack seemed to be worse than the last and it was creating enormous concern particularly amongst the African ambassadors who publically commented with anger.

Did the heads of States you visited bring up this matter?

Not that I recollect. No.

So, they were diplomatic enough not to touch on a subject that could have been awkward for you to handle?

Well, yes but they did not touch upon it. We had very good conversations in each one of those visits.

And given the totality of the Indo-African relationship and the background to that relationship, my wife and I were very well received in each one of those countries.

Now, the official position of the Government of India articulated by the spokesperson of the MEA and the foreign minister was that these are not racists attacks, but the African ambassadors angrily dissented, they did so publically and large sections of the media was convinced that this was racism.
As someone who was an intelligent observer although watching from the Vice President’s house, what was your opinion?
Was this an instance of Indian racism or simply law and order?

Well, it is scandalous to begin with.

So, was the official response the right one or should they have been more willing to accept that this is more than just law and order?

Could have been more forthcoming.

They could have and should have been more forthcoming.

That’s a very important point you have said. I want to use this moment Mr Vice President to talk about the general situation in the country today because I know it is one that concerns the large sections of the country.
Hardly a day goes by without us reading about cow vigilante attacks, earlier we read about lynchings, we have read about beef bans, people who refuse to say ‘Bharat Mata Ki Jai’ have been publically told that they should leave the country, there have been accusations of love jihad, Ghar wapsi campaigns and even killings of rationalists.
How do you view all of this? Sitting in this house, how did you view all of this?

Breakdown of Indian values, breakdown of the ability of the authorities at different levels in different places to be able to enforce what should be normal law enforcing work and over all the very fact that the Indianness of any citizen being questioned is a disturbing thought.

Why were Indian values breaking down suddenly?

Because we are a plural society that for centuries, not for seventy years, has lived in a certain ambience of acceptance.

And that ambience is suddenly changing?

It is under threat.