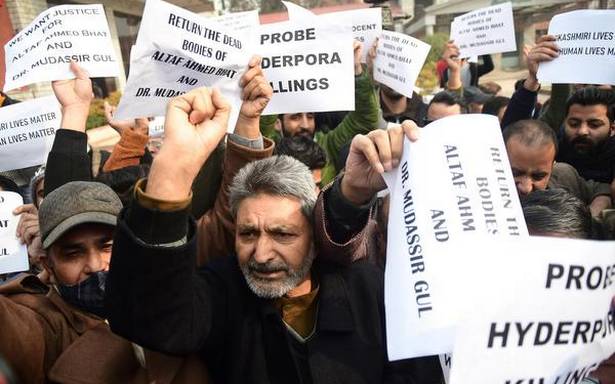 ‘Report needs judicial acceptance before it can be made public’

The magisterial investigation ordered into the Hyderpora encounter last month has completed its inquiry and judicial approval is now awaited before it can be made public, a senior Jammu and Kashmir official said on condition of anonymity.

“Because it is a magisterial inquiry, it needs judicial acceptance before it can be made public. There are some technicalities to be completed because of which the process is delayed,” the official said. The J&K Police had also ordered their own inquiry which has also been completed but it cannot be revealed before the magisterial inquiry is made public, the official stated.

Speaking on the encounter, the official said it was unfortunate that the owner of the house Altaf Bhatt died under unfortunate circumstances caught in the crossfire, but it is yet to be confirmed if the bullets were those that were fired by the security forces or Bilal himself. Bilal is a foreign terrorist who has been residing in the house for the last four days and before that in Bandipora and his movements were confirmed by digital forensics, the official said.

The encounter took place on November 15 in which four persons were killed. After protests by the families alleging that three of the four killed were civilians and public outcry, Jammu and Kashmir Lieutenant Governor Manoj Sinha ordered a magisterial inquiry, by an officer additional district magistrate rank, into the incident on November 18.

The police had claimed that four persons were killed, including a foreign terrorist, in a joint operation by the police, Army’s 2 Rashtriya Rifles and Central Reserve Police Force (CRPF). Other than the civilian Altaf Bhatt, the police described Dr. Mudasir Gul, a dentist, and Muhammad Amir Magarey as militant associate and hybrid militant. However, there was public outcry that they were civilians and used as human shields.

The official stated that specific intelligence was received on the presence of terrorists in the house of Altaf Bhatt. The first floor of the three-storey building was leased out to Dr. Gul who had put Magarey as the caretaker. “Magarey, a resident of Banihal, earlier worked as an over ground worker of an Lashkar-e-Taiba (LeT) commander, while Dr. Gul was running an illegal call centre from the rented apartment,” the official claimed.

A thorough search was conducted of the three-storey building and moments before the search was called off, a member of the search party recollected that two locked rooms adjoining the attic were left unchecked and Altaf Bhatt was asked for the keys while Dr. Gul and Magarey were asked to move ahead and unlock the rooms. “Moments later, gunshots were heard at approximately 6 p.m. It was later found that the hidden terrorist named Bilal who hailed from Pakistan had shot Dr. Gul and Magarey suspecting that they had given him up to the security forces,” the official claimed.

On hearing the gunshots, the security forces rushed into the house and in the ensuing gun fight Altaf Bhatt received fatal bullet injuries, which he later succumbed to, the official said.

On Bilal, the official said he was killed with a weapon in hand and in possession of other arms. Digital forensics by the police of an internet dongle found in his possession has confirmed that the was in the house for the preceding four days. Further, the official said that 24 hours before the encounter, Bilal was present at the location of an incident at Chowk where a police official was shot by an unidentified gunman from a point blank range. The policeman survived the attack and later confirmed that the identity of Bilal, he added.