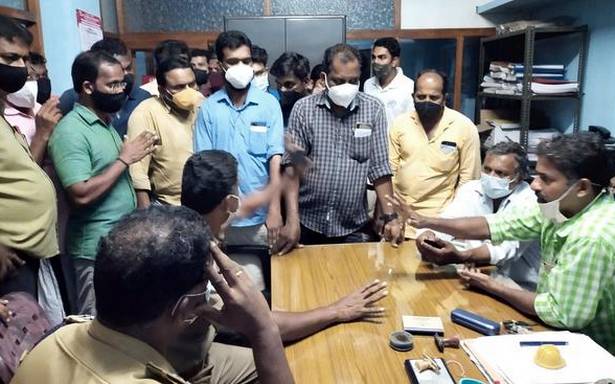 More than 100 investors staged a protest at the CPI(M)-controlled Peravoor Co-operative House Building Society in Peravoor after it failed to return the money invested in a chit fund started in 2017.

The police cordoned off the area as the people gheraoed the secretary of the society P.V. Hari, and staged a protest.

The investors alleged that the society had been delaying paying back about ₹3 crore to more over 150 people. Sibi Macheri, one of investors, said that more than 600 persons had joined the chit of ₹1 lakh, which was started by the society in 2017.

The period ended on August 15, but more than 150 investors are yet to get back the amount deposited in the society.

Mr. Macheri said that he had visited the society more than eight times but the officials had failed to return the money.

The society had promised to pay the full amount at maturity.

Investors believed this and invested money, said another investor, on the condition of anonymity.

The society then promised to pay pay the money by September 30. But when the investors came to the society on Thursday, the board members demanded another six months for paying back the money.

Following this, the investors staged a protest and gheraoed the secretary. The protest went on till 7 p.m., and later, the police who held discussions with the secretary, ordered holding of a board meeting in the presence of the investors on Friday at 2 p.m. to sort out the issue.