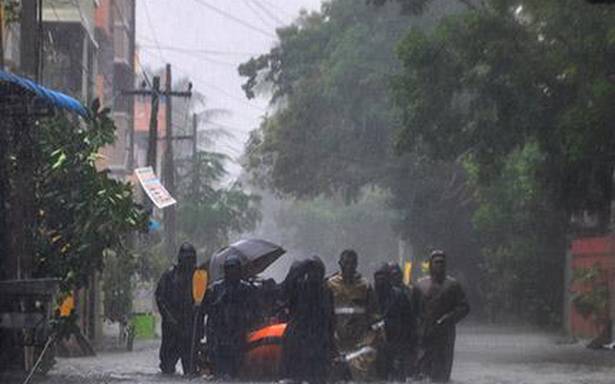 Wet weather likely for another week

The rain pounding Kanniyakumari district and its neighbouring areas may abate slightly from Monday.

The Meteorological Department has issued an orange alert for the district and a few others along the Western Ghats, as they may receive heavy to very heavy rain in one or two places.

Wet weather may continue over the State for another week. On Monday, many places in the State are likely to receive light to moderate rainfall.

Besides Kanniyakumari, the Nilgiris, Theni, Dindigul and Tiruppur districts are likely to get rainfall of very heavy intensity. Sixteen other districts, including Chengalpattu, Kancheepuram, Ranipet, Cuddalore and Erode, have prospects of heavy rain in one or two places.

There may be a slight dip in the coverage of rainfall in the State on Tuesday and Wednesday. Chennai, which witnessed extreme rainfall episodes, may experience a break, as the department has forecast light or moderate rain in some areas till Tuesday.

S. Balachandran, deputy director general of meteorology, Chennai, said strong westerly winds and a shear zone had led to such severe rainfall in the Kanniyakumari region. On the next weather system, he said the department was monitoring its movement. The impact over Tamil Nadu will depend on its movement and how it gains strength. For instance, if it moves towards south Andhra Pradesh, some parts of the State may receive some rain.

Water release from reservoirs that provide drinking water to Chennai has been reduced considerably after rain eased over the city on Sunday. Chennai did not receive any significant rain.