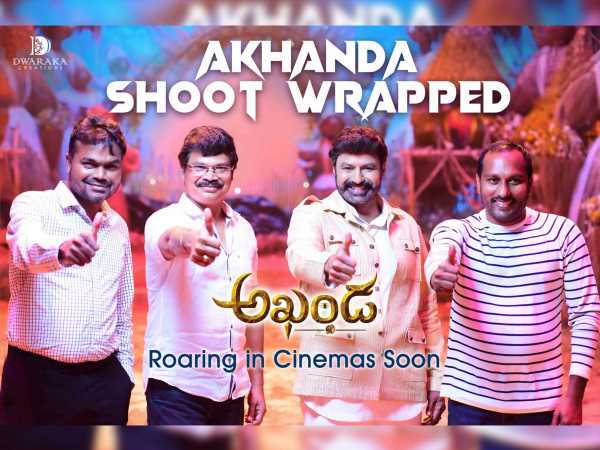 Nandamuri fans are eagerly waiting for the release of action drama Akhanda in which Balakrishna is playing the lead role. In the film, Balakrishna plays the dual role in which one of the characters will be playing the role of Aghora.

Now according to the latest report, the entire shoot of the film including songs has been wrapped up. The production house Dwarka creations confirmed the same by releasing a pic on twitter handle. According to the makers,  the post production work is going on at the brisk pace and soon the movie will arrive at the theaters.

The upcoming film Akhanda is written and helmed by Boyapati Srinu and produced by Miryala Ravinder Reddy under the banner of Dwaraka Creations banner.   The upcoming film marks the third collaboration of Balakrishna and Boyapati Srinu after Simha and Legend. This is the first time, Pragya Jaiswal is sharing the screen space with Balayya. The teaser of Akhanda that launched on YouTube on 13th April that grabbed the attention of  the movie lovers and generated good buzz.

The first lyrical video song of Boyapati Srinu’ directorial venture Akdhana was released on 15th August. Akhanda  has music by S Thaman, cinematography istaken care of by C Ram Prasad and Kotagiri Venkateshwara Rao is the editor of this film.