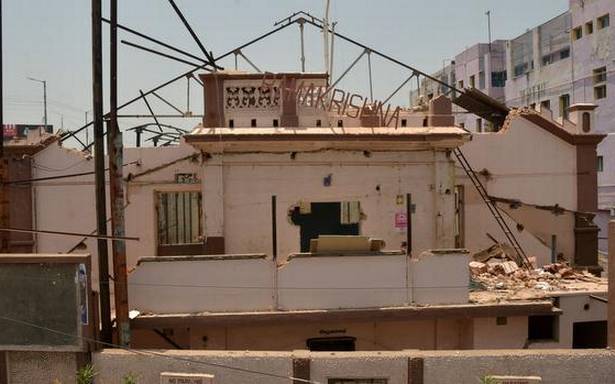 The theatre was set up in 1934, the same year Mr. Ramakrishnan was born. It came up on a piece of land which Mr. Srinivas, a doctor, had purchased to set up a hospital. Mr. Srinivas’ cousin from Chennai who ran a dubbing studio had encouraged him to do it as they could release films produced at their studio. Excess metal purchased for constructing Mettur dam was auctioned off, and the frames of the building were made using that very same metal.

Up to 1947, the theatre ran with help from Mr. Srinivas’ brother. However, when his wife fell ill, they decided to lease the theatre out to a family who were already running Plaza Theatre, which screened popular English films in the city. “They screened English films at our theatre too. I remember watching ‘Land of the Pharaohs’, ‘20,000 Leagues Under the Sea’ at the theatre, years before I was married into the family,” Ms Jambaka said.

When the 10-year-lease was over, the theatre was dragged into legal trouble as the daughter-in-law of the man who owned Plaza had sublet the theatre to another man. By then, Mr. Srinivas had bequeathed the theatre to Ms Jambaka in his will. “An 18-year-long battle ensued, with my husband, my brother and I taking turns to appear in court,” she said. In December 1989, she won the court battle. The man who they had fought against destroyed the furniture, ruined the screen and left the theatre in tatters, she recollected.

After four months of renovations, the theatre reopened to the public in July 1989. “Even though we had gone through so much trouble, the highest we charged for a ticket, even until 2012, was ₹20," she said. There were tickets for ₹15, ₹10 and ₹5. They would even give out seven tickets for free for each show.

The theatre functioned under the watchful eyes of Ms Jambaka for 24 years, until 2012, when the family decided to sell it. “I was getting old, and by then the flyover had been constructed and the area was becoming notorious and unsafe,” she said.

“There is a piece of me in every brick of that theatre”, she reminisced. “My father-in-law did not permit women to take up work outside the house. I had a portrait of him on the wall in my office at the theatre. Every day I would look at that picture and think of how far I had come, how a woman ran a theatre all on her own for 24 years,” she said, with pride.

The theatre, despite its old-world charm was no match for the newly cropping up multiplexes and had run itself into heavy debt, said S. Venkatesh Krishnan, who purchased the theatre from Mrs. Ramakrishnan in 2012. “People prefer multi-screen theatres,” he said. The COVID-19 pandemic and lack of business for over a year pushed it into further trouble.

"Though the building is being demolished, we are yet to decide on what to do with the land,” he added.