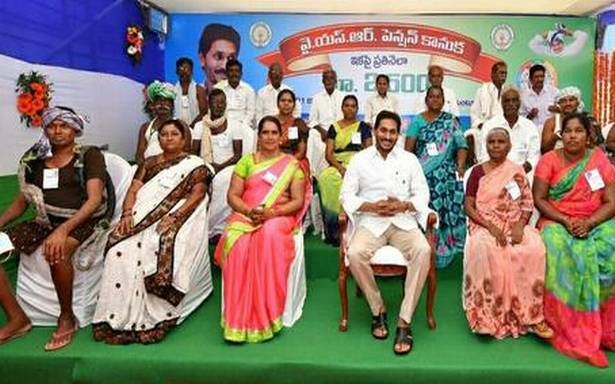 ‘Government in mission mode to fulfil promises made in election manifesto’

Coinciding with the New Year, Chief Minister Y.S. Jagan Mohan Reddy on Saturday launched the distribution of enhanced pension programme, and released ₹1,570 crore for the purpose for the month of January.

Under YSR Pension Kanuka, pensioners, who were hitherto getting ₹2,250, would now be receiving ₹2,500 every month.

Mr. Jagan Mohan Reddy launched the programme at Prathipadu village in the presence of a large number of people, many of them senior citizens.

“The government is on a mission to fulfil all the promises made in the manifesto. In the last 30 months, 62 lakh beneficiaries were provided pension of ₹2,250 at their doorstep by a team of dedicated volunteers. This year, they will receive ₹2,500 as pension,” Mr. Jagan Mohan Reddy said.

“During the TDP term, only 39 lakh beneficiaries had been given a pension of ₹1,000 each. We have enhanced the amount to ₹2,250 soon after forming the government, benefiting almost 62 lakh people. With the fresh enhancement, the monthly expenditure will go up to ₹1,570 crore,” he added.

“Besides providing social security pension to the elderly, widows, and the disabled, the government is giving pension to patients suffering from critical illnesses,” Mr. Jagan Mohan Reddy said, and added that “Andhra Pradesh is the only State to come up with such an initiative.”

On YSR Pension Kanuka alone the government had spent over ₹45,000 crore since inception, he said.

Taking a dig at the Opposition, he said there were many who criticise though the government had been providing financial support to those who were unable to eke out a living.

“The opposition parties are going to courts against the house site distribution programme in Amaravati citing demographic imbalance. They are also objecting to the OTS scheme knowing well that it enables the poor gain full rights over their houses. They politicise introduction of English medium in government schools, distribution of house sites, and even regulation of the price of cinema tickets,” he said.

Stating that the government did not hold back any welfare initiative despite financial difficulties induced by the COVID-19 crisis, he suggested those having difficulty in receiving pension to contact the village / ward secretariats, or the volunteers immediately, or dial the toll-free number 1902 for help.