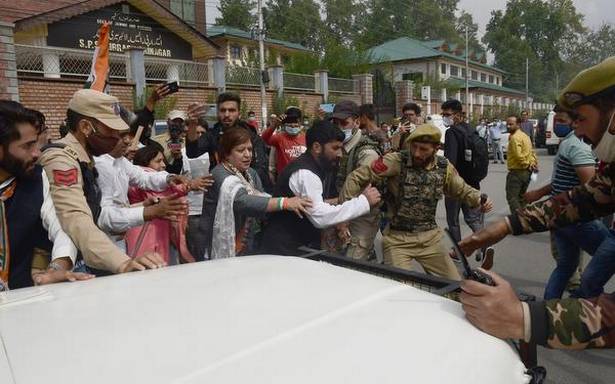 The protesters jumped police barricades, marched on the busy Residency Road for a short distance, raised slogans against the BJP government for its “dictatorial rule”.

The Jammu and Kashmir Congress on Tuesday staged a protest outside the party headquarters in Jammu against the Lakhimpur Kheri violence and the subsequent detention of party leader Priyanka Gandhi.

The protesters jumped police barricades, marched on the busy Residency Road for a short distance, raised slogans against the BJP government for its “dictatorial rule” and harming democratic institutions, before concluding the demonstration peacefully.

Congress general secretary Priyanka Gandhi was detained in Sitapur on her way to Lakhimpur Kheri, where eight people died and several others were injured on Sunday in the bloodiest clash since the beginning of the farmers’ protest over the Centre’s new agri laws.

Led by J&K Congress vice-president Raman Bhalla, the party activists gathered outside its headquarters at Shaheedi Chowk in the city to lodge their protest against the “shameful and ruthless killing” of farmers and the U.P. police detaining Ms. Gandhi. They demanded a judicial probe into the incident.

“We have assembled here to strongly condemn the killing of the farmers and lodge our protest against the dictatorship of the BJP governments, both in Uttar Pradesh and at the Centre,” Mr. Bhalla told reporters amid high pitch sloganeering by party activists in support of Ms. Gandhi and against the killing of farmers.

Mr. Bhalla said the Congress leader had tried to go there to “wipe the tears” of the bereaved families but was detained in an “unconstitutional and unethical” manner.

“We will continue our protest against the BJP governments, which are intoxicated by power. We will press for revocation of the three farm laws. The farmers are on the streets for nearly a year but this government is not paying any heed,” the Congress leader said.

Youth Congress leader Uday Bhanu Chib, who was also part of the protest, said the people of Uttar Pradesh have lost faith in the BJP governments both in the State and at the Centre.

“The strong-arm tactics against peaceful protests is the hallmark of the BJP government in Uttar Pradesh,” he said, demanding “restoration” of democracy and rule of law in the State.