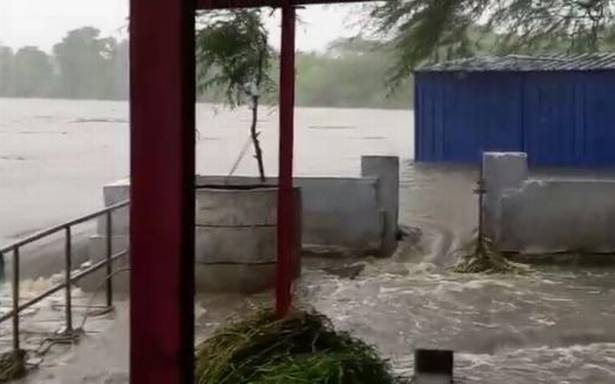 National Highway No. 44 was inundated and a temporary bridge washed away.

The southern parts of Anantapur district received heavy rain on July 17 and in the early hours of July 18, disrupting road transport between Kadiri and Bengaluru.

The highway connecting Kadiri, via Gorantla, with National Highway No.44 was inundated and a temporary bridge on the road was washed away in the night.

The temporary bridge on Bengaluru-Kadiri highway was washed away at Mittapalli, between Gorantla and Kadiri. Officials have asked people not to venture on this road and to take the longer, alternative route via Nallamada and Kondakamarla cross.

Kadiri received 21.50 cm rainfall in 12 hours, leading to several rivulets overflowing and emptying into the Chitravathi river, causing flooding in many areas.

Kadiri Urban circle inspector Srinivasulu, along with his staff, rescued a mother — identified as Manasa, a Gandlapenta Mandal village volunteer — and her 10-month-old child who were stuck in their inundated house on Adapala Veedi area of Kadiri. The mother and child spent the entire night in the house, unable to go outside due to the rain, and sought police help over ‘Dial 100’ at 4 a.m.

The police immediately rushed to the spot with the help of inflated rescue tubes and shifted them to safety. Superintendent of Police Fakkeerappa Kaginelli congratulated DSP Bhavya Kishore, CI Srinivasulu, and other staff for the immediate response.

The Lakshminarayana Swamy temple in Kadiri was also inundated due to the heavy inflow of floodwater.