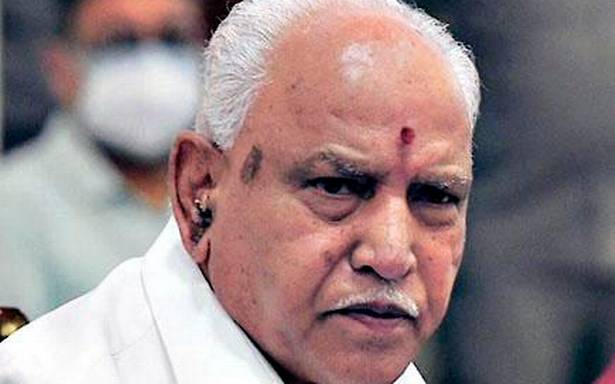 There is no truth in the rumour, asserted the chief minister, who will return to Bengaluru on Saturday after meeting the BJP chief and the Union ministers.

On Saturday, Karnataka CM B.S. Yediyurappa dismissed rumours about his resignation, saying it is not at all true.

“Not at all. Not at all,” Mr. Yediyurappa told reporters at the Karnataka Bhavan here when asked if he has resigned.

There is no truth in the rumour, asserted the chief minister, who will return to Bengaluru on Saturday after meeting the BJP chief and the Union ministers.

The meeting came at a time political circles are abuzz with speculations of Mr. Yediyurappa being replaced as the chief minister.

Repeated open remarks by some disgruntled leaders within the Karnataka BJP targeting him and his family with accusations of corruption and interference in administration have embarrassed the party and the government, despite warnings of disciplinary action by the leadership.

Another section of the party is demanding the replacement of 79-year-old Mr. Yediyurappa, citing his age and the need of projecting a new CM face ahead of assembly polls in 2023, sources said.

On a possible cabinet rejig, before the meeting with PM Modi, Mr. Yediyurappa had said, “I will tell you if there is any such discussion with (party) seniors over the restructuring or expansion of the Cabinet.” An official statement issued after the Friday meeting had said the chief minister discussed various state issues with the prime minister.