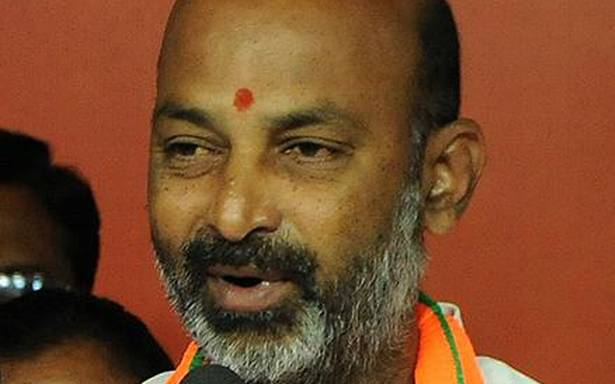 ‘State govt. should have withdrawn case pending in SC’

The Bharatiya Janata Party (BJP) on Sunday held Chief Minister K. Chandrasekhar Rao responsible for Telangana being denied the right share of Krishna water by not withdrawing the case pending in the Supreme Court for the last six years because of which Centre could not refer the matter to the tribunal, otherwise there was a chance of getting 650 TMC out of the 1,005 TMC of water.

“Mr. Rao failed people of Telangana by not withdrawing the case when it was suggested by Union Minister Gejandra Shekhawat in the Apex Council meeting in October last year. He wasted another eight months on this. This kind of indecisiveness costed us and the legitimate interest of the people got sabotaged by his ‘Tuglak’ behaviour,” said party president Bandi Sanjay Kumar.

Thanking Mr. Shekhawat for agreeing to seek legal opinion to refer the matter to the tribunal, he said the party has faith in the Centre and that it would certainly consider the matter and do justice to the people of Telangana.

The Brijesh Kumar Tribunal has given its award in 2011 by giving 1,005 TMC to the combined State of Andhra Pradesh but this was not published as the matter is pending in the Supreme Court.

Meanwhile, the State was formed in 2014 and the KCR government filed a case in the Supreme Court in 2015 asking that a new tribunal be formed to do water allocation to all four States of Maharashtra, Karnataka, Telangana and AP. Ever since the matter is still pending in the SC.

Mr. Sanjay Kumar said the Chief Minister has been blaming the Centre all these seven years for not referring to the new tribunal though the matter is before the Supreme Court.

“The Chief Minister has been adamant and did not listen to Centre’s advice of withdrawing the case all these years or the matter would have progressed a lot by now,” he said.