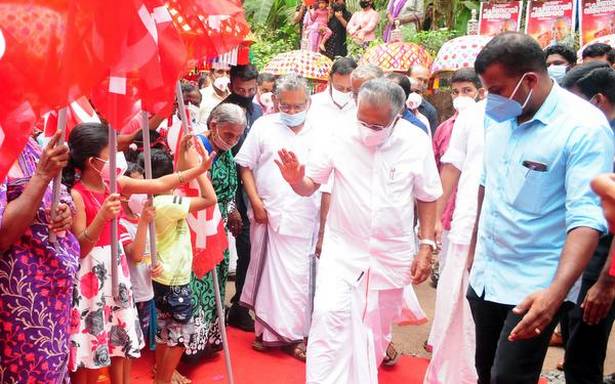 Confident LDF fields perhaps its most high-profile candidate in Pinarayi Vijayan, while the UDF faces an uphill task and the NDA takes up the gauntlet

On Wednesday, residents of Kakkoth, a small ward in Chembilode panchayat in the Dharmadam constituency in Kannur, were in jubilation.

Children waving red and white balloons and others holding decorative umbrellas stood on both sides of the road. The scorching afternoon heat hardly seemed to bother them. But their eyes lit up upon hearing the sound of crackers bursting and drums beating.

They would soon catch a glimpse of Chief Minister Pinarayi Vijayan, visiting the ward as part of the Left Democratic Front’s election campaign. Many jostled to click photos of the CM, who stood speaking from a make-shift podium.

Mr. Vijayan said the Congress, the BJP and the Indian Union Muslim League had no clue about facing the LDF and hence were spreading baseless rumours. "They allege that the LDF is a government that helps the corporates. But they are the ones who actually help them. People know the BJP’s policy, which is to make the rich richer and the poor poorer,” he said.

“People have to be conscious. I appeal to you to vote for the LDF to ensure a secular State, for development and to build a new Kerala,” said the Chief Minister.

Meanwhile, a few kilometres away, C.K. Padmanabhan, the NDA candidate in the Dharmadam constituency, too was in the thick of campaigning. "Though flex boards and walls here seem to be filled with pictures of the Chief Minister, the lotus occupies the minds of the people here,” he said emphatically.

Mr. Padmanabhan’s electioneering received a boost a few days ago when BJP national president J.P. Nadda campaigned for him at Chakkarakkal in Anjarakandy panchayat.

Referring to the upcoming elections as “a historical Kurukshetra battle”, Mr. Padmanbhan appealed to the people to vote for the lotus symbol to ensure that the benefits of development projects implemented by the Narendra Modi government reached every nook and corner of the State. “Due to the fear unleashed by the Marxist party, many prefer to remain silent here. They see the BJP as an alternative in order to live fearlessly and peacefully,” he said.

“We are trying to build a new country that is free of corruption and one that sees development in all fronts. For this, we have introduced the slogan ‘A new Kerala with Narendra Modi’,” he said.

On another street in Chakkarakkal, a huge hoarding of the UDF candidate C. Raghunath stands tall. Though a strong candidate like Congress MP K. Sudhakaran was initially considered in the constituency, the UDF approved Mr. Raghunath’s nomination in the final minutes. However, Mr. Raghunath said that he took it all in a positive stride as he got enough “publicity” from the episode.

During campaigning, he stops at an anganwadi functioning from a poky rented location in Muzhappalingad, where he turns visibly emotional. Assuring help in constructing a proper anganwadi, he said it was unfortunate that such a situation existed in an LDF panchayat.

Expressing confidence of a victory, he said that unlike Mr. Vijayan, he was a grassroots-level worker and would always be available for the people.