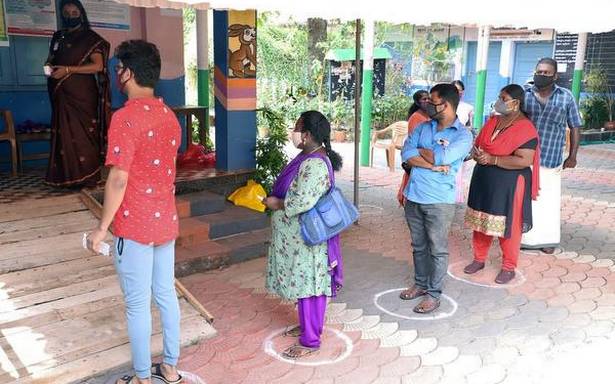 Barring physical distancing, most other requirements of the COVID-19 protocol were met at polling stations across the district. While masks were distributed among those who failed to wear one, a few polling booths surprised one and many by handing out disposable gloves and marking circles to maintain a safe distance among voters.

While the capital district had warmed up to the idea of adopting measures to mitigate the COVID-19 spread during the local body elections last year, polling officials rose to the occasion admirably yet again. The growing awareness among the public too went a long way into upholding the norms.

Despite the authorities’ inability to enforce social distancing norms, the Election Commission of India’s (ECI) move to arrange auxiliary booths and cap the maximum number of voters prevented crowding to a large extent.

Volunteers and special police officers ensured that each voter was subjected to thermal screening and had their hands sanitised prior to entering the booths. Such guidelines were thoroughly ensured except in a few polling stations, including the Minor Irrigation Office in Varkala where the equipment ceased to function.

Officials at the Mukkudil Lower Primary School in the Vamanapuram constituency sprang a surprise as they went a step ahead in enforcing COVID-19 norms to distribute disposable gloves to voters. Circles were marked outside another polling booth in the same constituency to enforce physical distancing.

Such initiatives would prove heartening for the authorities who have been exploring options to enforce the pandemic norms that were being dismissed as “impractical” by a large section of officials.