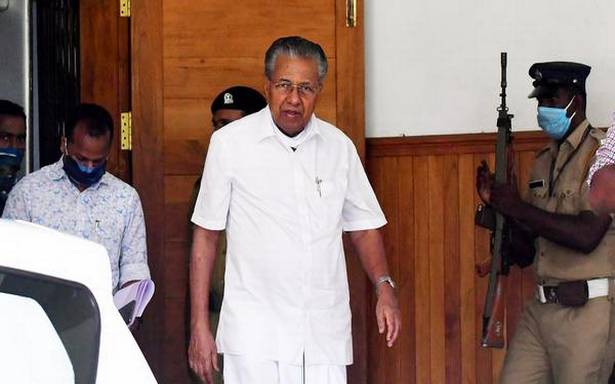 Italian connection of Monson under investigation

Chief Minister Pinarayi Vijayan on Tuesday dropped a strong hint in the Assembly that KPCC president K. Sudhakaran, MP, could come under the ambit of the Crime Branch (CB) investigation into alleged trickster and fake antiquities peddler Monson Mavunkal.

Without naming Mr. Sudhakaran, Mr. Vijayan said the CB had received a specific complaint that Monson had accepted a large sum of money as credit from a business person in the presence of an “important person.”

Mr. Vijayan said the petitioner had named the “dignitary” as an abettor in the complaint. Monson had told the petitioner that he required the help of some influential people in New Delhi to release foreign payments held up in his various international bank accounts. The complainant handed over ₹25 lakhs to Monson in the presence of the VIP as a loan.

On the right track

“The CB probe was on the right track, and it will reach those responsible. The Opposition need not hurry the probe to settle scores within their own ranks. Let the law take its own course. If somebody has consumed salt, the person will inevitably drink water,” Mr. Vijayan said.

Leader of Opposition V.D. Satheesan said Mr. Vijayan’s attempt to raise the bogey of an investigation against Mr. Sudhakaran to defend the Government’s complicity in the Monson episode would not pass muster with the public. The KPCC president had made it clear that he was guiltless and ready to face any probe. He demanded the Government also investigate the background of Monson’s creditors and the source of their funds.

Mr. Vijayan distanced the Government from Monson’s purported “ancient copper plaque” touted as evidence that a particular family in Alappuzha had a traditional right over the Sabarimala temple. Congress legislator P.T. Thomas had alleged that CPI(M) organ Deshabhimani and some party intellectuals had claimed the plaque was authentic.

Mr. Vijayan said the Crime Branch would investigate Mr. Thomas’s complaint that an Italy-based Malayalee woman with unknown credentials was an invitee at the State Police’s Cyber Security Conference, Cocoon. Mr. Thomas had also pointed out that woman was a member of the Kerala Loka Sabha.

Mr. Vijayan said the Government would give no quarter to any police officer found guilty of aiding Monson.