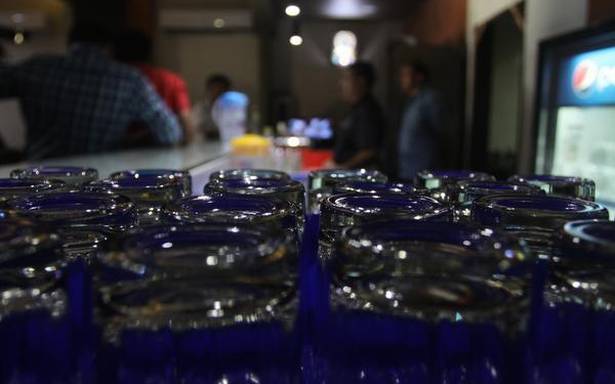 The State government on Friday instituted a three-member committee to break the deadlock in the bar hotel sector.

Excise Minister M.V. Govindan has tasked them to examine the Kerala State Beverages Corporation’s (Bevco) sudden hike in wholesale profit margin from eight per cent to 25%.

The move had prompted nearly 730 bar hotels and 300 odd beer and wine parlours to down shutters in protest on June 20.

The hotelier’s association had argued that the purchase rate of alcohol for bars was higher than the MRP. Hence, bars have to sell liquor at loss or risk prosecution under the packaged commodity rules.

The government had allowed bars to sell liquor as a takeaway at an MRP rate from June 17.

The Bevco’s decision had reportedly caught the government by surprise. The government appeared mindful that prohibitionists and the opposition could portray any decision to reduce the Bevco margin as a move to aggrandize the bar hotel lobby.

The government had earlier included 28% of the Bevco profit margin in excise duty to avoid huge IT payments. It had charged a token eight per cent as wholesale margin. Now, the corporation had hiked the margin by 17% allegedly without consulting stakeholders or taking the government into confidence.

The Bevco reportedly told the Minister that the increase in wholesale profit margin would replenish the public coffer. Moreover, it would drive the retail liquor business away from bars and towards Bevco outlets. The State stood to earn ₹12,000 crore or more annually from the levy on legal liquor. The per capita consumption of alcohol in Kerala is among the highest in the country.

However, the government reportedly felt that the closure of bars had caused buyers to swamp State-run outlets in violation of COVID-19 regulations.

Moreover, the closure of bar hotels did not augur well for the struggling tourism industry. The government is considering opening up holiday destinations to fully vaccinated leisure travellers. The shutting down of bars had also thrown hundreds of persons out of work.

The bar hoteliers’ association had moved the government against Bevco’s decision. Its representative Biju Ramesh said the bar purchase rate of the lowest-priced rum was around ₹611 for a one-litre bottle. However, its MRP was fixed at ₹600. Hence, bar hotels could only sell at a loss. The unjustifiably high tab for liquor finally falls on the consumer, he said.

The difference between the price on the MRP label and that charged by bars had resulted in quarrels between sellers and customers.

The Excise has now mandated that bars display the stock and price list prominently near sales counters. Some bars have opened beer and wine-only counters.