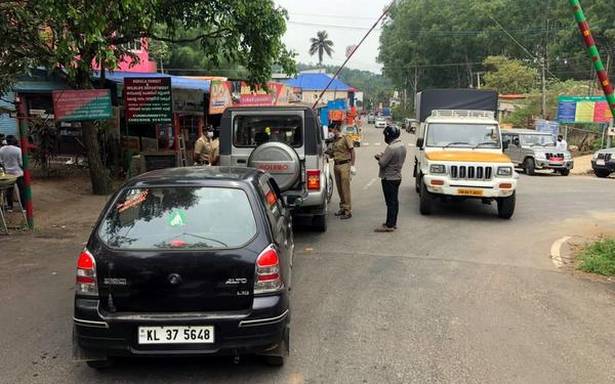 They even ask for COVID-19 negative certificate at some places

Without any intimation, Kerala authorities have started restricting entry of visitors from Tamil Nadu at checkposts on the Theni- Idukki border by insisting on e-pass since Tuesday

In some check-posts, when visitors from Tamil Nadu show the e-pass, the Kerala authorities ask them to produce COVID-19 negative certificate.

Every day thousands of labourers from many parts of Theni district cross the border at Bodimettu, Cumbummettu and Kumuli and go to numerous tea and cardamom estates in Idukki district of Kerala. They use buses, SUVs, autorickshaws and two-wheelers to go to their workplaces in Kerala and to return home. Tourists from Tamil Nadu and other States also go to Kerala through these border checkpoints.

With the rise in number of COVID-19 cases and the Theni district administration declaring more than 30 containment zones, the authorities in the neighbouring State have stepped up vigil round-the-clock to prevent entry of COVID-19 infected people.

On Tuesday, when workers from Theni district attempted to cross the checkpost on foot, they were stopped. Only after they obtained e-pass were they allowed into Kerala. The sudden decision by the Kerala authorities took not only the public by shock, but also the officials in Theni district. Usually, there would be communication such as this at least 48 hours in advance, a health department official at the Collectorate said and added that probably the Kerala authorities would have taken the decision following rise in COVID-19 cases in Tamil Nadu too.