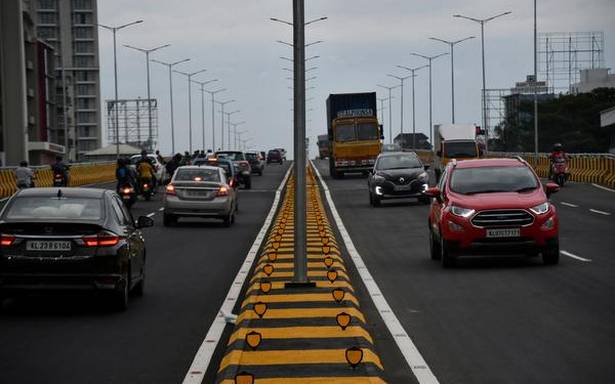 The Vyttila-Palarivattom-Edappally stretch on the NH Bypass and roads leading to it witnessed unprecedented traffic snarls, soon after a pair of six-lane flyovers were opened to traffic on Saturday afternoon.

While commuters caught unawares by serpentine snarls turned restive, traffic police personnel were seen running around, trying to unwind the hold-ups. “The fact that it was Saturday, when employees and others leave Kochi for their home towns, made matters worse. Personnel manning junctions on the Edappally-Kundannoor NH Bypass and roads leading to it are having a harrowing time managing traffic flow. There was unusual number of vehicles converging at Edappally as well, mainly from the Vyttila side,” said a traffic police officer.

It had a ripple effect in other parts of the city as well, including on the Edappally-Kalamassery NH and Civil Line Road.

Vehicles proceeding along the NH Bypass had a tough time entering side roads, mainly at Vyttila. Many of then have narrow bellmouths, which considerably slow down vehicle movement. For instance, the maddening snarls on SA Road could have been avoided if vehicles on the Elamkulam-Vyttila stretch were able to take a free-left turn at Vyttila. Buses and other vehicles which wait in a long queue, awaiting the green signal to proceed towards Thripunithura and the Vyttila Mobility Hub, choked the narrow bellmouth at the curve.

The PWD or the National Highways Authority of India (NHAI) must also widen the curve from the Palarivattom side towards Kaniampuzha Road, if need be, by removing a few shops that obstruct vehicles which turn towards the road, they added.

“Saturday’s chaos could have been prevented if the PWD had paid heed to suggestions by novices like me and even by Metroman E. Sreedharan to build an innovative flyover at Vyttila, the biggest junction in Kerala,” said Shamier Abdulla, a social activist who went up to the High Court of Kerala in 2017 with the demand.

“Instead, the PWD opted for a conventional flyover linking just the northern and southern sides of the junction. This and avoidance of land acquisition on the flyover’s eastern side considerably narrowed down the slip road that ought to accommodate vehicles from Palarivattom waiting to turn towards SA Road and take left turn towards the Mobility Hub and Thripunithura. Such issues must be rectified as soon as possible, if need be, by acquiring requisite land,” he added.

Officials of the PWD (NH Wing) which built the Vyttila flyover attributed Saturday’s chaos to unscientific timings fed into the signal system. This will be altered in the coming days, and Keltron has been informed of it. “Traffic movement will hopefully be streamlined in a day or two. The problematic expansion joints over the Vyttila railway bridge that is maintained by the NHAI is considerably slowing down vehicles,” said a senior official.

Ultimately, a considerable chunk of traffic — especially goods carriers — must be taken away from the NH Bypass by fast-tracking the Kundannoor-Angamaly NH Bypass mooted by the NHAI, he said.