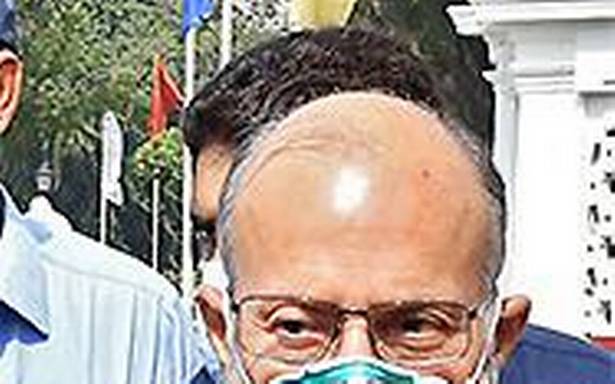 ‘Meetings held were within ambit of constitutional provisions’

Lieutenant-Governor Anil Baijal on Thursday sought to “strongly refute” allegations of infringing upon the rights of the AAP-led Delhi government.

Deputy Chief Minister Manish Sisodia, in a letter to Mr. Baijal on Saturday, had alleged that Mr. Baijal was chairing meetings on matters within the domain of the elected government, issuing directions to officers of various departments without informing the Minister concerned and pressurising them to implement them.

In his response, the L-G termed these “insinuations and statements” devoid of “any merit and without any evidence” and also regretted that the matter was being discussed publicly.

“Needless to state that this office has the highest regard for the principles of democracy and is committed to the implementation of the judgment of the Supreme Court, both in letter and spirit as regards the constitutional scheme of division of power in Delhi,” Mr. Baijal stated.

Meetings which had been called by the L-G, he stated, had been “strictly within the ambit of constitutional provisions and responsibilities” entrusted to the office of the L-G. These were also to facilitate and coordinate effective planning, preparedness and implementation of specific programmes and tasks given the multiplicity of agencies in Delhi and to ensure inter-agency coordination across state and national level agencies, Mr. Baijal said.

“Instead of appreciating the basic objective and outcome sought to be achieved by way of review meetings held at my level, it is unfortunate that incorrect aspersions have been cast upon me,” the L-G said.

In his capacity as chairperson of the Delhi Disaster Management Authority, three meetings were held to ensure necessary preparedness for tackling any future COVID-19 surge.

These, the L-G said, were followed by nine more to ensure effective implementation of the advice given by national-level experts and the decisions taken. Some of the meetings, the L-G pointed out, were attended by Mr. Sisodia along with Chief Minister Arvind Kejriwal and Health Minister Satyendra Jain.

“Was it a violation of constitutional and democratic principles to convene meetings on issues pertaining to the management of COVID in larger public interest,” the L-G asked.

The Supreme Court judgment regarding the division of powers between the L-G and the elected government, Mr. Baijal stated, desired that the Lieutenant-Governor should act as a facilitator.

“In sync with the above, two meetings were convened to facilitate and coordinate the implementation of national schemes like PM SVANidhi, One nation One Ration Card (ONORC),” Mr. Baijal stated.

“Was it wrong to call these meetings to facilitate coordination between Central and State government agencies to ensure effective implementation in the larger interest of the welfare of the people?” he also asked.

He also pointed out that he had taken up the issue of water supply to Delhi with the Chief Ministers of Uttar Pradesh and Haryana at Chief Minister Arvind Kejriwal’s “personal request”.

“It is not understood as to how convening meetings to enhance availability of water for the citizens of Delhi can be seen as interference in the working of the government,” Mr. Baijal stated.

Governance cannot be divided into “water-tight compartments” as the subject matters were interlinked with each other with decisions in one subject affecting others, he said.

All these meetings, Mr. Baijal stated, were convened through videoconference on the open platform of the NIC and not “within the confines of the Raj Niwas.”

“The meetings were convened only to monitor the implementation aspects of programmes and schemes where no policy decisions were required to be taken. If policy issues were involved then the Hon’ble Minister concerned would have been invited also,” the LG added.

“It is only unfortunate that a biased and incorrect connotation has been ascribed to the acts done in good faith. I continue to remain undeterred and strongly committed to perform my constitutional duty and to the highest principles of democracy in the service of the welfare of the people of the national capital,” the L-G stated.