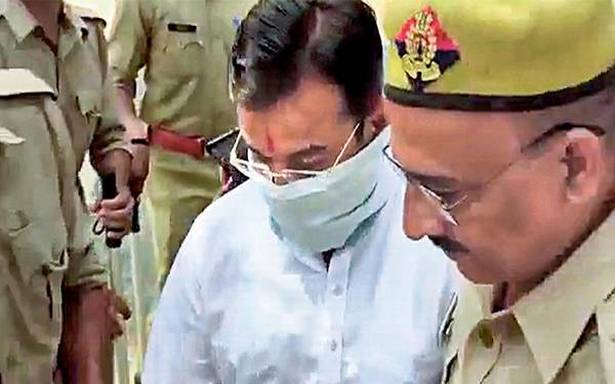 On October 26, SC had asked the Uttar Pradesh Government to record the statements of other witnesses

The Supreme Court is scheduled to hear on Monday the matter related to the October 3 Lakhimpur Kheri incident in which eight people, including four farmers, were killed in violence during a farmers’ protest.

A bench comprising Chief Justice N.V. Ramana and justices Surya Kant and Hima Kohli would hear the matter in which the apex court had on October 26 directed the Uttar Pradesh government to provide protection to witnesses under the Witness Protection Scheme, 2018.

Watch: In Focus podcast | What happened in Lakhimpur Kheri?

The top court had also asked the Uttar Pradesh government to record the statements of other witnesses before the judicial magistrate under section 164 of the Code of Criminal Procedure (CrPC) and expedite the examination of digital evidence by experts.

Statements under section 164 of the CrPC are recorded before a judicial magistrate and they have evidentiary value.

The bench had sought a status report from the State government on the alleged lynching of a journalist and one Shyam Sundar by the mob, after a vehicle mowed down four protesting farmers.

The top court is hearing the Lakhimpur Kheri matter after two lawyers had written to the CJI seeking a high-level judicial inquiry, also involving the CBI, into the incident.

The counsel appearing for the State government had told the apex court on October 26 that out of 68 witnesses, the statements of 30 witnesses have been recorded under section 164 of the CrPC and some more testimonies will be recorded.

"Of these 30 witnesses, 23 claim to be eye-witnesses. A lot of witnesses are formal witnesses of recovery and all," the State’s counsel had told the bench, adding that 16 accused have been identified so far.

The police have so far arrested several accused, including Union Minister of State for Home Ajay Mishra’s son Ashish Mishra, in connection with the case.

Four farmers were mowed down by an SUV in Lakhimpur Kheri when a group agitating against the Centre’s three farm laws was holding a demonstration against the visit of Uttar Pradesh Deputy Chief Minister Keshav Prasad Maurya on October 3.

Two BJP workers and a driver were beaten to death allegedly by the angry protesters, while a local journalist was also killed in the violence.

Farmer leaders have claimed that Ashish Mishra was in one of the cars that allegedly knocked down the protesters but the minister has denied the allegations.

Several farmer organisations are protesting against the three laws — The Farmers Produce Trade and Commerce (Promotion and Facilitation) Act, 2020, The Essential Commodities (Amendment) Act, 2020 and Farmers (Empowerment and Protection) Agreement on Price Assurance and Farm Services Act, 2020 — since last November.

The apex court had stayed the implementation of these laws in January.

Initially, the protests started from Punjab but later spread to Delhi, Haryana, and Uttar Pradesh.