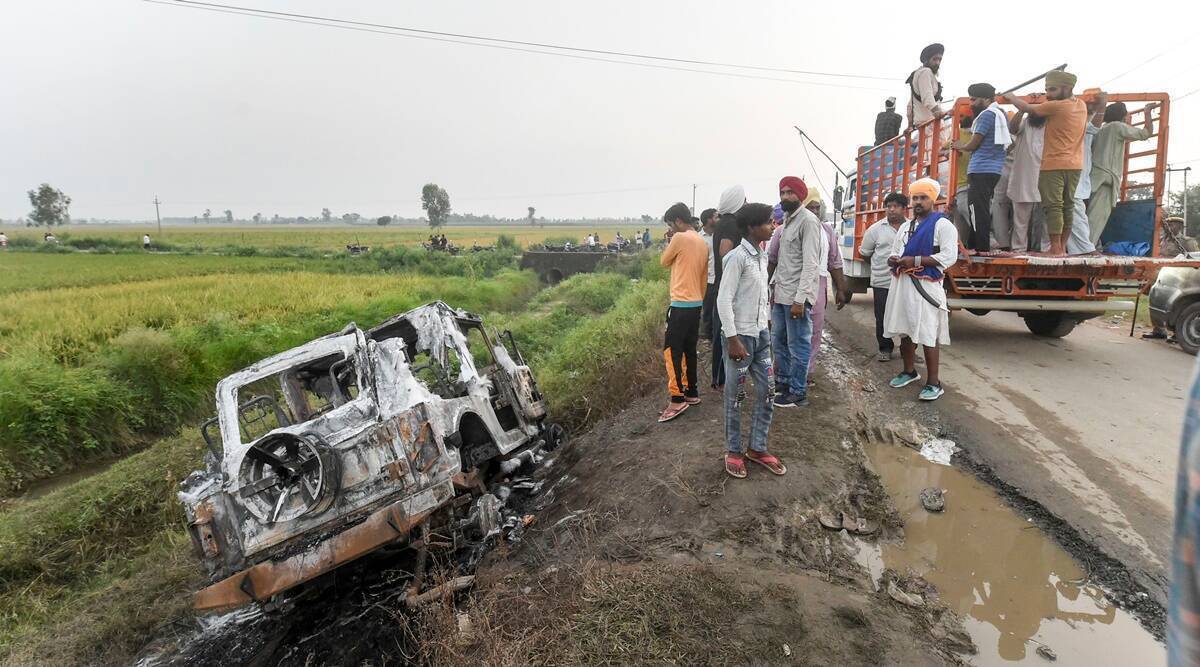 The apex court, on November 8, had expressed dissatisfaction over the probe and suggested that to infuse "independence, impartiality and fairness" in the ongoing investigation, a former judge of a "different high court" should monitor it on day-to-day basis. The Supreme Court Friday granted time till November 15 to the Uttar Pradesh government for apprising its stand on the suggestion that a former judge of a “different high court” should monitor the state SIT probe on day-to-day basis in the Lakhimpur Kheri violence in which eight people including four farmers were killed on October 3.

“Would your Lordships give me time till Monday? I have almost got it done. We are working something out,” senior advocate Harish Salve, appearing for the UP government, told the bench headed by Chief Justice N V Ramana.

“List on Monday,” said the bench which, also comprised justices Surya Kant and Hima Kohli, acceding to the request.

The apex court, on November 8, had expressed dissatisfaction over the probe and suggested that to infuse “independence, impartiality and fairness” in the ongoing investigation, a former judge of a “different high court” should monitor it on day-to-day basis.

The bench had also said that it has no confidence and does not want the one-member judicial commission appointed by the state to continue probe into the case.

Retired Allahabad High Court judge Justice Pradeep Kumar Srivastava was named by the state government to enquire into the eruption of violence on Tikonia-Banbirpur road in Lakhimpur Kheri district.

The state government was asked to inform about its stand on the suggestion of monitoring of probe by a former judge of a different high court.

“We, somehow or the other, are not confident and we do want any judicial commission appointed by your state government to continue,” the bench had said.

Observing that the investigation was not going the way it expected, the bench had red flagged some of the issues pertaining to the SIT probe conducted so far and said: “prima facie it appears that one particular accused (in the farmers’ mowing down case) is sought to be given benefit” by securing or procuring evidence from witnesses in the subsequent case related to the lynching of political activists by the farmers’ mob.

It was also very critical of the Special Investigation Team (SIT) of state police for seizing the mobile of Ashish Mishra, one of the arrested 13 accused, and rest of the phones belonged to the witnesses to the alleged mowing down of the farmers.

“We have seen the status report. There is nothing in the status report except to say that some more witnesses have been examined. We granted 10 days time. Laboratory reports have not come. No, no, no…it is not going the way we expected,” it had said.

“We propose to appoint a person like say from Punjab and Haryana High Court, Justice Ranjit Singh, who has an expertise in criminal law and army background… let an independent judge like Justice Rakesh Kumar Jain, again from the same HC, monitor everything,” it had said.

Prior to this, the bench had directed the Uttar Pradesh government to provide protection to witnesses under the Witness Protection Scheme, 2018 and to record the statements of other witnesses before the judicial magistrate under section 164 of the Code of Criminal Procedure (CrPC) and expedite the examination of digital evidence by experts.

The police has so far arrested 13 accused, including Union Minister of State for Home Ajay Mishra’s son Ashish Mishra, in connection with the case. The apex court was hearing a matter about the October 3 violence in Lakhimpur Kheri in which eight persons including four farmers were killed during a farmers’ protest.

Four farmers were mowed down by an SUV in the convoy at Lakhimpur Kheri when a group agitating against the Centre’s three new farm laws was holding a demonstration against the visit of Uttar Pradesh Deputy Chief Minister Keshav Prasad Maurya on October 3.

Two BJP workers and a driver were beaten to death allegedly by the angry protesters, and a local journalist was killed in the violence.