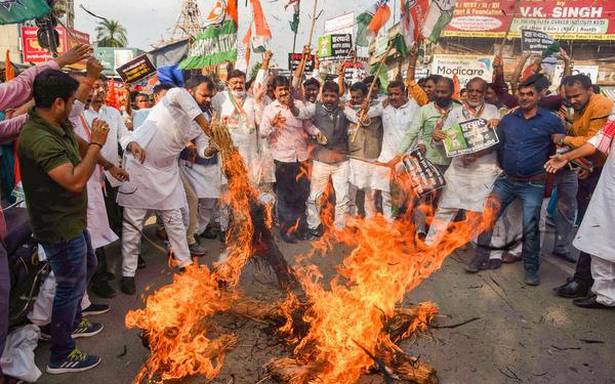 Bench gives 24 hours to file a status report containing details of the eight persons killed in the incident.

The Supreme Court on Thursday gave the Uttar Pradesh Government 24 hours to file a status report identifying the accused in the First Information Report (FIR) registered on the Lakhimpur Kheri violence and whether they have been arrested or not.

Instilling a sense of urgency in the State Government even as a Bench led by Chief Justice of India ordered the State to facilitate immediate medical care for the mother of a 19-year-old man who was among the killed in the incident.

“While hearing this case now we got a message that the mother of one of people who died is in a state of shock over the loss of her son and needs immediate medical attention… We want you to get her admitted at the nearest hospital,” the court addressed Uttar Pradesh Additional Advocate General Garima Prashad, for the State.

Ms. Prashad said it would be done immediately while describing the Lakhimpur Kheri incident as “extreme, unfortunate”.

“But we want to know who are the accused in the FIR and whether they have been arrested or not,” Justice Surya Kant, on the Bench, told the Uttar Pradesh Government.

Chief Justice Ramana said the status report should contain details of the eight persons killed in the incident.

News reports said four of the deceased were farmers mowed down by a vehicle which was part of the convoy of Union Minister of State for Home Affairs and BJP MP Ajay Kumar Mishra.

Ms. Prashad said the State Government had constituted a Special Investigating Team and a judicial inquiry had begun. An FIR had been registered and the investigation was on.

‘Investigation is not proper’

“But the grievance here is your investigation is not proper,” the CJI said.

The Chief Justice was referring to a letter written by two lawyers, advocates Shivkumar Tripathi and C.S. Panda, based on which the court had taken cognisance of the Lakhimpur Kheri case.

Ms. Prashad said the State would try to file the status report by Thursday itself even as the court listed the case for Friday.

The court hearing comes on the same day when news channels have aired videos reportedly of the Lakhimpur Kheri incident.

Thursday’s hearing of the case before the CJI’s Bench comes just three days after another Bench of the court had lashed out at farmers’ bodies, connecting their nearly year-long protests against farm laws to the violence that occurred in Lakhimpur Kheri.

That Bench led by Justice A.M. Khanwilkar had said that “nobody takes responsibility” when incidents like in Lakhimpur Kheri occurs

“When such incidents happen, causing deaths, loss to property and damage, nobody takes responsibility,” Justice Khanwilkar had observed on Monday.

Attorney General K.K. Venugopal, for the Centre, had described the Lakhimpur Kheri violence on Sunday an “unfortunate incident”.

“No more unfortunate incidents like this should take place… The protests must stop,” Mr. Venugopal, supported by Solicitor General Tushar Mehta, had submitted.