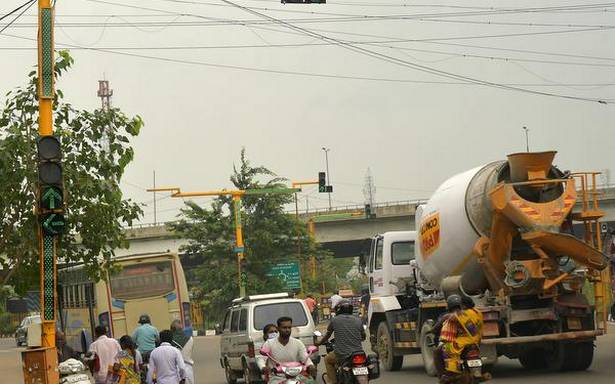 Fourteen signals around the Mannarpuram roundabout have been fitted with digital LED traffic light poles. The bright lights would be visible even from a distance.

Many vehicles, especially two-wheelers, complain that the traffic signal was not visible when they were caught jumping it. Officials are now happy that such complaints would not be entertained. The poles feature LED lights in the shape of an inverted letter ‘L’ fitted along the poles. The standard signals too remain as they indicate the direction of traffic flow along with the lights.

Vehicles speeding along the highway will be able to see the signal at a distance and slow the vehicle, avoiding any mishaps.

Speaking to The Hindu, a traffic policeman deputed said that the initiative, including fitting of LED lights and speaker systems playing soothing music was an attempt to streamline the traffic flow in the city. It would make the roads safer, he said.

The LED light poles have been installed on the signals surrounding the Mannarpuram roundabout on a trial basis, and would be extended to other crowded signals in the city soon. A city-based tech company has sponsored the signals on a Corporate Social Responsibility (CSR) initiative.