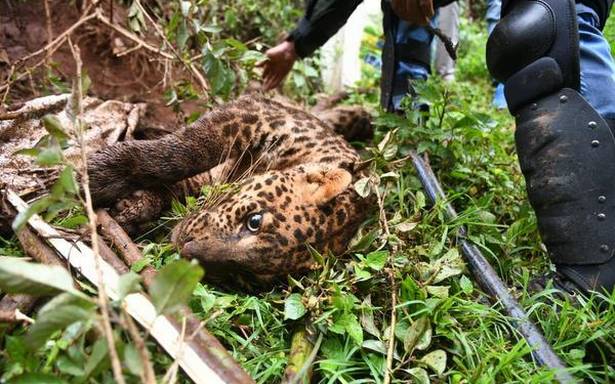 The leopard had tried to enter a small farm adjoining a cattle pen, when it got trapped; despite being rescued by Forest Department staff, the animal did not survive

A young male leopard died after getting trapped in a snare in Yellanalli in Ketti, a few hundred meters from the Ooty-Coonoor Road on Thursday morning.

The leopard had tried to enter a small farm adjoining a cattle pen, when it got trapped in a snare. Officials said that the owner of the property had put up barbed wire fences to prevent the animal entering and preying on the dogs he had been raising.

Forest Department officials were informed of the incident at around 10 a.m. on Thursday morning and arrived soon afterwards. They then waited for veterinarians to arrive to attempt to rescue the animal, which had gotten trapped in a snare fashioned from a brake line used in motorcycles.

Guru Swamy Dabbala, District Forest Officer, Nilgiris division, said that the team of Forest Department officials had decided to try and release the animal without using a tranquillizer to minimise the chance of complications to the animal. “After the snare was removed, we hoped that the animal would recover and escape. However, it did not move after 30 minutes, and we were planning to bring it to the veterinary hospital in Udhagamandalam when it died,” said Mr. Dabbala.

A case has been registered against the owner of the land and investigations are on into the incident. “Strict action will be taken against the perpetrators,” he said.

Forest Department officials said that in other instances, carnivores have gotten trapped in snares laid to trap wild game such as boar and black-naped hare in the Nilgiris. This snare appeared to have been kept to discourage the leopard from entering the farm. They said that they believed that the animal was around three years old.