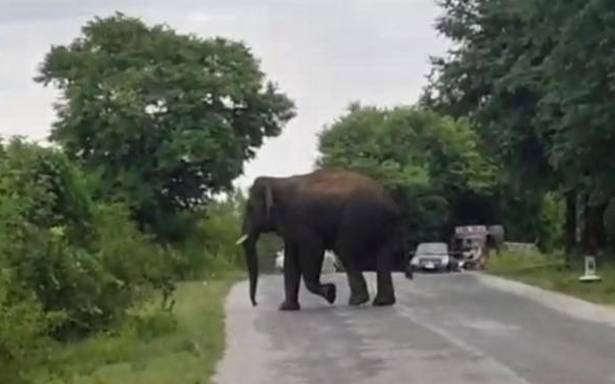 According to information, the lone tusker had trampled paddy and vegetable crops of three farmers in the village, besides pulling down the fencing around the fields

Even as reports of a lone elephant destroying crops and chasing farmers in the fields for almost a fortnight in half a dozen villages in the Palamaner range is causing worry among the local residents, the presence of another lone tusker has been reported from Madhavaram village of Tavanampalle mandal, 30 km from here.

According to information, the lone tusker had trampled paddy and vegetable crops of three farmers in the village, besides pulling down the fencing around the fields on the night of November 12. Though a group of youth tried to drive the tusker away by firing crackers but they had to withdraw the move owing to the pachyderm’s aggressive nature. A team of forest watchers was dispatched to the troubled spot in the early hours of November 13.

Meanwhile, the Divisional Forest Officer (Chittoor West) S. Ravi Shankar said that a herd of wild elephants from the Koundinya sanctuary zone was spotted crossing the terracotta building area at Cattle Farm near Palamaner, and their movement was caught in a CC camera. “Several herds of elephants are currently moving in the sanctuary area. We want the public, particularly the farmers, to be careful while moving in the open. They are advised to avoid wearing white clothes and maintain night vigils in the fields,” he said.