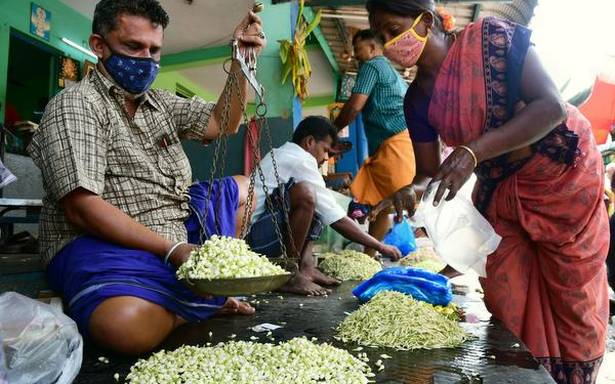 It has come at a time when a brisk business was expected, say stakeholders

The prices of jasmine, button rose and other flower varieties have crashed in the span of a fortnight at the Maatuthavani Wholesale Flower Market.

After the State government announced closure of temples for three consecutive days in a week – Friday, Saturday and Sunday, – retail vendors near shrines in the city have stopped buying flowers during the long weekends. With the demand dwindling, wholesale merchants have stopped buying from farmers who have raised jasmine and other flowers.

Shahjahan, a flower merchant, said that the third wave of COVID-19 pandemic had dealt a severe blow to the farmers and merchants, January being an auspicious month and marriage season as well. He said that these adverse situations had brought down the price of jasmine to ₹1,000 a kg.

It was selling for ₹2,500 and ₹4,000 per kg during Deepavali and Christimas/New Year eve, respectively. If the situation worsens, the prices may come down further. In such a scenario, there would be no option but to down the shutters, he said.

The price of mullai and pichi sold at ₹700 and ₹800 per kg, respectively. The prices of flowers had roughly come down by 40% in the past week, said Kamatchi, another wholesale merchant.

Farmers and jasmine growers from Avaniapuram said that just when they were getting ready to do some brisk business during the marriage season, the third wave had spoiled all their plans.

With a huge number of Ayyappa devotees from far and near visiting Madurai en route to Sabarimalai at this time of the year, closure of shrines had come as a big blow to all businesses in general. At least, as in other commercial establishments, devotees should have been permitted into shrines after they produced their vaccination certificates. When experts had opined that lockdown was not the solution for the present times, the temples should have remained open, a cross-section of the stakeholders said.

A police official in the Mattuthavani region said that there was an absolute lack of self-discipline at the flower market, where all COVID SOP norms were flouted. Traders and customers were not wearing masks and people not maintaining social distancing. So, the government could very well close the markets, as in the case of places of worship, he said.