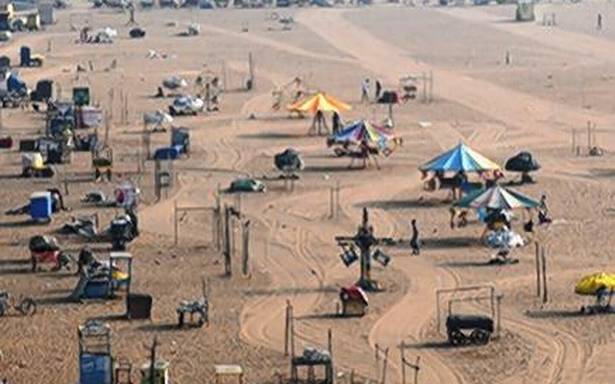 The Madras High Court has once again taken up the task of cleansing the Marina beach, and called for exhaustive details relating to the maintenance of the beach, safety of visitors, regulation of vendors and fish sellers.

Justices N. Kirubakaran and T.V. Thamilselvi expanded the scope of a batch of writ petitions seeking licence to sell ice cream on the beach, and directed the Greater Chennai Corporation to answer by July 22 a series of 12 questions posed by them.

The judges wanted to know the quantity of garbage generated on the beach every day and the methodology adopted to clear it. They also asked whether people, who litter the beach, were being fined or not by the Corporation authorities concerned. Further, seeking details about the number of restrooms available on the entire stretch of the beach from Anna Square to Light House, the court asked whether mobile restrooms had been stationed and if not, by when would they be arranged. The Division Bench wanted to know the amount of money spent annually for the maintenance of the beach and the monthly revenue generated from authorised vendors. The court also sought details about police booths since visitors stay in the beach even beyond 10 p.m.

After directing the Corporation to spell out the steps being taken, as well as proposed to be taken, for enhancing the beauty of the beach, the judges asked why a fish market should not be constructed on the loop road to prevent fish sellers from squatting on the road.

They also wanted to know the possibility of constituting a committee headed by an IAS officer to ensure cleanliness and maintenance of the beach. Officials from the Corporation, Public Works Department, police, local councillors, environmentalists, social workers and hawkers among others could be made part of the committee, they suggested.

Another Division Bench, comprising of Justices Vineet Kothari and R. Suresh Kumar, had undertaken a similar exercise last year, but the efforts were disrupted after the transfer of Justice Kothari to the Gujarat High Court early this year.