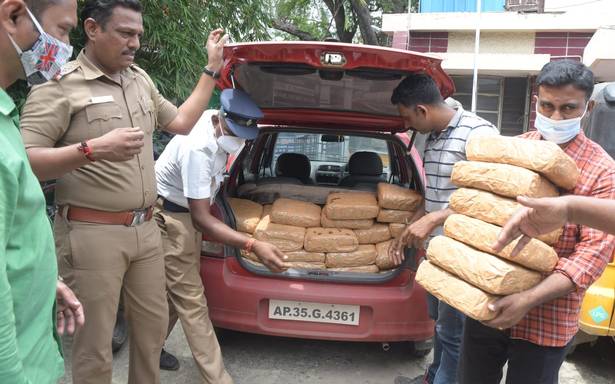 Maduravoyal police, in cinematic style, chased a car and seized more than 200 kilogrammes of ganja from it, near the Vanagaram toll plaza on Monday.

A senior official of the City police said H. James working as a Head Constable in the Poonamalee traffic division was heading over Maduravoyal Outer Ring Road when the driver of a car hit him from behind and tried to escape without stopping. The traffic police immediately with the help of Venkatachalam of the Maduravoyal traffic police posted to regulate traffic in Maduravoyal, chased the car.

In the meantime the traffic police also alerted the control room. Noticing the two police officials chasing them, the driver and an accomplice abandonned the car and escaped.

A police team led by Maduravoyal police Inspector Siva Anand rushed to the spot and within an hour rounded up the driver who tried to hide in the Vanagaram Market.

Senior police officials have visited the Maduravoyal police station and are investigating the case.