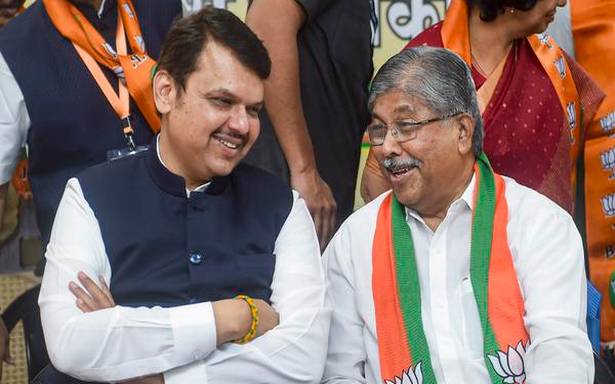 BJP leader and former Chief Minister Devendra Fadnavis on Tuesday termed the Maha Vikas Aghadi (MVA) government the most corrupt in the history of Maharashtra. He said the riots in Vidarbha’s Amaravati were an attempt to polarise minorities against the Union government, as the Opposition had no counter to the BJP’s politics of development.

“What happened in Amaravati, Nanded and Malegaon cannot be taken lightly. It was a systematic attempt to polarise minorities against the Narendra Modi government, as they [Opposition] are left with no counter to our politics of development,” stated Mr. Fadnavis, addressing a one-day State executive council meeting.

“A protest march was organised in Tripura to support Hindus in Bangladesh. Social media started spreading rumours about a mosque being burnt down. Rahul Gandhi tweeted on November 8 claiming atrocities against Muslims. And protests of thousands were held in November 11. Those were organised with the help of the State government where properties of Hindus were targeted.” he said. Such protests could not be held without planning, he asserted.

Other speakers such as party’s State president Chandrakant Patil too raked up the issue of riots. He accused the Shiv Sena of becoming anti-Hindu, hinting that the BJP’s next course of action would be hardline Hindutva. He claimed that this was an experiment on the lines of what urban Maoists did in Koregaon-Bhima. “The BJP does not support violence. But we will not let properties of Hindus be vandalised.” He gave a call to the party workers to hit the streets and launch agitations against the government. “Let’s begin to work on the ground level, without thinking whether we will form a government or not. We have to defeat the government in the coming local body polls and then, whenever State polls are held, we will form a government on our own.”

Earlier, BJP’s State in charge C.T. Ravi said the Shiv Sena backstabbed the BJP as people voted for Mr. Modi and Mr. Fadnavis. “This State has a part-time Chief Minister. We challenge them to conduct mid-term elections. The BJP will win.” People were eager to throw away the ‘anti-people’ government, he added.