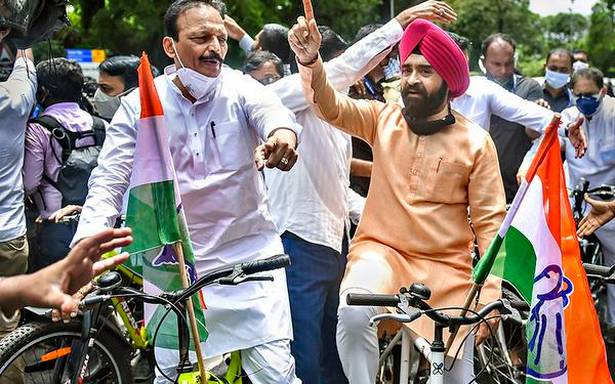 The Maharashtra Congress on Thursday held cycle rallies in Mumbai and several parts of the State to protest against the rising fuel prices and inflation in the country.

“People of the country are getting no respite from rising prices. Bharatiya Janata Party (BJP) leaders are advising States to reduce taxes. States do not get their rightful GST compensation, but the Centre is happily collecting taxes,” Mr. Patole said

Mr. Patole said the Maha Vikas Aghadi government was being guided by Nationalist Congress Party (NCP) chief Sharad Pawar when asked about reports of differences emerging with allies the NCP and the Shiv Sena. “Uddhavji, Balasaheb Thoratji, Ajit Pawarji are running this government. We are confident that we will complete five years,” he said.

The Rules Committee of the Assembly has recommended a change in rules to elect the Speaker through open voting instead of holding a secret ballot. The committee held its meeting on July 6 and the recommendation will be presented in the Assembly for discussion. Once approved, the rules will be changed. The Maharashtra Assembly is the only House in the country where the Speaker is elected through secret ballot.

However, the BJP claimed that the rules were being changed as the government was not sure of having a majority in the House. “First of all, we have to check whether a Deputy Speaker is allowed to chair a meeting of the Rules Committee. Why is this government scared of a secret ballot? Don’t they have a majority?” asked Leader of Opposition Devendra Fadnavis.

In reply, Mr. Patole asked whether the BJP was not in favour of ensuring transparency. “Even the Council chooses its chairperson through open voting. The change is being brought to ensure uniformity?” he said.