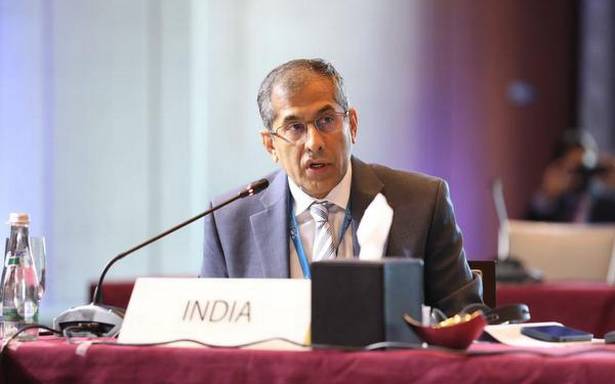 Ambassador to the United Arab Emirates Pavan Kapoor has been appointed as the envoy to Russia, the Ministry of External Affairs announced on Monday, part of a major reshuffle of postings in the neighbourhood and other major capitals.

In a series of “round-robin” postings, Mr. Kapoor is being replaced by High Commissioner to the Maldives Sanjay Sudhir, who is in turn being replaced by Ambassador to Oman Munnu Mahawar. Amit Narang, Joint Secretary for the Indian Ocean Region (IOR) and handling relations with the Maldives, Sri Lanka, Mauritius and other island neighbours from headquarters, has now been appointed as the Ambassador to Oman.

In addition, Director General of the Indian Council for Cultural Relations Dinesh Patnaik will head to Spain as envoy in the next few months, the MEA announced. Secretary, Consular Passports and Visas, and Overseas Indian Affairs (CPV &OIA) Sanjay Bhattacharyya is expected to head to Switzerland and appointments to Mexico and Myanmar are expected shortly. The Government has also extended the tenure of External Affairs Minister’s special advisor former journalist Ashok Mallik for another year.

According to Ministry insiders, the reshuffle is one of two major such exercises to be carried out in the next few months, ahead of Foreign Secretary Harsh Shringla’s retirement due in April 2022. However, it is unclear whether Mr. Shringla, who was appointed in 2020 after his tenure as Ambassador to the U.S., and has worked closely in the foreign service with External Affairs Minister S. Jaishankar, will be given an extension. The next in terms of seniority would be High Commissioner to U.K. Gaitri Issar Kumar.

Mr. Kapoor is taking over the important P-5 posting in Russia from Ambassador Venkatesh Varma, who is retiring after an eventful tenure that began in 2018, shortly after the informal summit in Sochi between Prime Minister Narendra Modi and Russian President Vladimir Putin.

The summit set off a number of major developments in ties including the signing of the S-400 missile system deal in 2019, which will be delivered by the end of this year, and India’s participation in the Eastern Economic Forum in Vladivostok, where Mr. Modi announced a credit line and the setting up of a sea-link to Chennai.

Mr. Varma received a “virtual send off” from the Indian Foreign Service (IFS) Association headed by Mr. Shringla last week who described him as a “master of India-Russia relations” during the two-hour event.