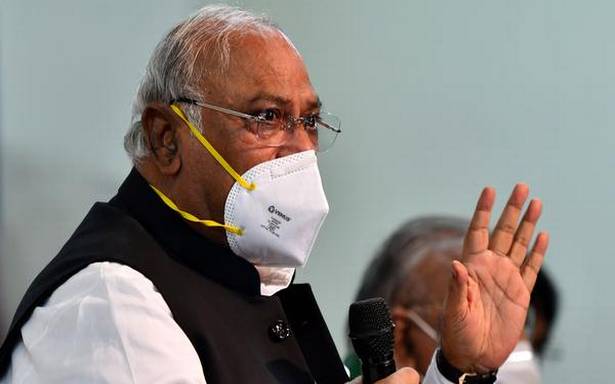 In a significant departure, Congress president Sonia Gandhi has deputed Leader of Opposition in the Rajya Sabha Mallikarjun Kharge, instead of the party’s Lok Sabha leader Adhir Ranjan Chowdhury, to lead the coordination with other Opposition parties.

At a meeting of Congress’s Parliamentary Strategy Group on Wednesday evening, sources said, Ms. Gandhi expressed dissatisfaction with the party’s coordination with the other like-minded parties during the Parliament session. “She has assigned the responsibility to Leader of Opposition in the Rajya Sabha Mallikarjun Kharge. Usually this charge remains with the floor leader in the Lok Sabha,” a senior party functionary said.

The move comes amidst intense speculation about Congress replacing Mr. Chowdhury, with many claiming that former Congress president Rahul Gandhi himself will be stepping into the role. Sources said Mr. Chowdhury would continue to stay on for now.

“There was no indication about replacing Mr. Chowdhury for now. As the Lok Sabha leader of the party, he shared his views on various issues,” one of the Congress leaders who attended the meeting said.

Giving the primary responsibility to coordinate with the allies to Mr. Kharge instead of Mr. Chowdhury is seen as an attempt by the Congress to have a better synergy with the Trinamool Congress. Mr. Chowdhury, who is also the chief of the West Bengal unit, had led the Congress campaign in the State. Though the Congress, which fought the elections in alliance with the Left parties, drew a blank, the central leadership effusively praised Chief Minister Mamata Banerjee for her victory against the BJP in the State.

Wednesday’s meeting that lasted more than 90 minutes also shortlisted the issues that the party will be taking up in the monsoon session. They include, the alleged mismanagement of the COVID-19 pandemic by the Modi government, repeated hikes in fuel prices, farmer’s agitation and the Indo-China border situation. The party will also raise the alleged scam in the purchase of Rafale aircraft.