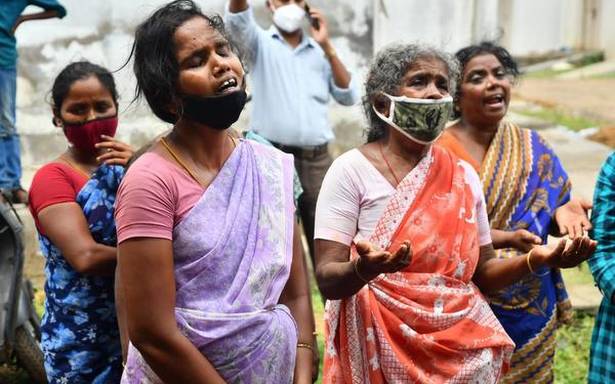 The victim, a farmer, was assaulted at a check-post following an argument; his friends pleaded with the police to let him go; video of the brutal attack goes viral

A 47-year-old farmer, A. Murugesan, of Edayappatti, died on Wednesday, after being indiscriminately beaten with a lathi by a policeman in public, at the Pappinaickenpatti check-post under the Yethapur police station limits in Salem district on Tuesday evening. According to preliminary information, the police assault was triggered followed an argument Murugesan had in an inebriated state with the uniformed personnel.

A video clip of the brutal attack, widely shared on mobile messaging platforms and social media on Wednesday, showed the police beating the farmer, though his friends pleaded with them to let him go. The policeman stopped the lathi blows only after Murugesan fell unconscious.

The video was shot by a villager accompanying Murugesan and it also showed Murugesan pleading with the policeman who continued to attack him with a lathi. Three policemen on duty were mere spectators when the incident took place.

Police sources said that Murugesan, along with two others on a two-wheeler went to a liquor shop in Kallakurichi district and were returning when they had an altercation with the police.

However, Murugesan’s wife Annakili said that he was beaten to death by the policeman and demanded action against all the four policemen. She said that her husband left home at 3 p.m. on Tuesday and the incident took place at 5 p.m. His friends shifted him to the Primary Health Centre at Thumbal and later admitted to the Government Hospital at Attur. But doctors referred him to Salem Government Mohan Kumaramangalam Medical College and Hospital where he died on Wednesday morning. The victim is survived by his wife, two daughters and a son.

As the news spread, relatives in large numbers gathered outside the Yethapur police station demanding action against the policeman. Police personnel were also posted to prevent untoward incidents.

The incident comes a year after a trader Jayaraj and his son J Bennicks died of police torture at the Sattankulam Police Station in Thoothukudi district.