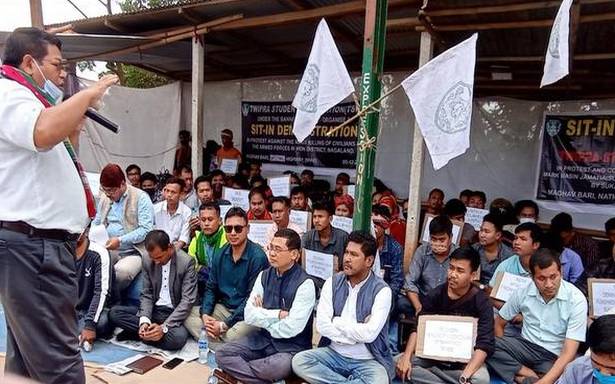 After the recent civilian killings in Nagaland, there is a clamour in the northeast States to revoke the Armed Forces (Special Powers) Act or the AFSPA. However, four years ago, the Union Ministry of Home Affairs (MHA) decision to remove areas under the AFSPA was resisted by at least two States — Assam and Manipur — both ruled by the Bharatiya Janta Party (BJP).

The AFSPA that has been in force in the northeast since 1958 gives unbridled power to the armed forces and the Central Armed Police Forces deployed in “disturbed areas” to kill anyone acting in contravention of law, arrest and search any premises without a warrant and protection from prosecution and legal suits without the Central Government’s sanction.

Both the Centre (MHA) and the State Governments have got the concurrent powers to issue notification under Section 3 of AFSPA.

For instance, the notification extending it in Manipur, right from the 1980s, has been issued by the Government of Manipur. In the last 40 years, the MHA has not issued any notification under the AFSPA for Manipur.

On December 9, Manipur Chief Minister N.Biren Singh said in Imphal, “We have been demanding its repeal in Manipur. We shall continue to do so.”

The latest AFSPA notification in the State in December 2020 was issued by the State Government. It is up for renewal on December 17.

A top official in Manipur told The Hindu, “Such decisions cannot be taken without the MHA. There is a deliberation going on to reduce AFSPA in certain areas, like earlier seven Assembly constituencies straddling Imphal were excluded. But Manipur faces immense threat from Myanmar-based groups and this has to be factored.” Among the northeast States, Manipur recorded the highest number of insurgency related incidents — 97 — in 2020 and 72 till August, though this is the lowest since 1999.

Nagaland Chief Minister Neiphiu Rio and his Meghalaya counterpart Conard K. Sangma have already demanded its repeal. The demand comes after the killing of 14 civilians in Nagaland on December 4.

The MHA issues “disturbed area” only for Nagaland and in Arunachal Pradesh the districts of Tirap, Changlang, Longding and areas falling under Namsai and Mahadevpur police stations bordering Assam.

In the case of Assam, the MHA was issuing the “disturbed area” order till 2017. Since then Assam has been renewing the notification every six months, the latest one issued on September 10.

In a series of meetings with the Army and the State Government, the MHA asked to either remove or reduce the areas under the AFSPA. The Assam Government did not concur. This was recorded in the 213th report of the department related parliamentary standing committee on home affairs tabled in the Rajya Sabha in July 2019.

It said when the Chairman enquired about the reasons declaring the whole State as a disturbed area against the advice of the Government of India, “the Home Secretary explained that the discussion between the Centre and the State Government was on the possibility of reduction of area under AFSPA.”

Assam reported only 15 insurgency related incidents in 2020 and 17 till August, one of the lowest since 1999. However, its September 10 notification mentions “evil design hatched by foreign intelligence agencies” and that the State shares boundary with Bangladesh “and is surrounded by other countries like People’s Republic of China, Myanmar and Bhutan” among eight reasons to extend AFSPA.

Besides noting threat from the United Liberation Front of Asom (I), the notification says “the emergence of Islamic terrorists groups like HUM, JMB and HM [Hizbul Mujahideen] in Assam also pose threats to the security scenario.”