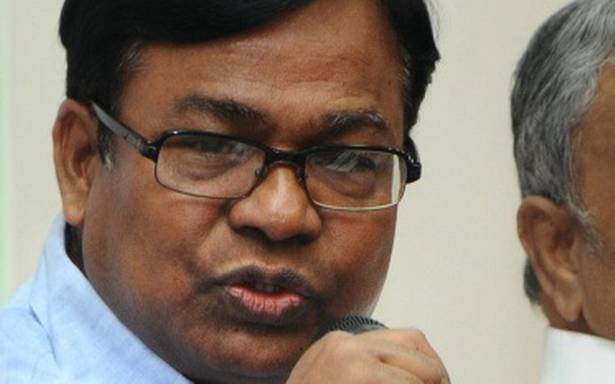 Bhakta Charan Das is likely to discuss the resignation of MPCC president Govindas Konthoujam and the Congress strategy for the 2022 Assembly election.

The visit comes even the Supreme Court verdict in the Congress’ disqualification case against 12 MLAs in ‘office of profit’ matter is awaited on July 26.

Earlier, the Manipur High Court had disqualified the 12 legislators who were appointed as Parliamentary Secretaries by the BJP government of N. Biren Singh in 2017.

Talking to reporters at the Imphal international airport, Mr. Das said that he would hold talks with Congress MLAs and others ahead of the reorganisation of the party in Manipur. In reply to a question, he said that there was no demand for changing Congress Legislature Party leader Okram Ibobi.

Replying to a question, Mr. Das said that all problems, including the reported resignation letter of the Manipur Pradesh Congress Committee president (MPCC) Govindas Konthoujam, would be discussed. He said that the post of the MPCC president was a very responsible one and there should be no acts of indiscipline which the party would not tolerate.

Apart from the resignation letter of Mr. Konthoujam, some newspapers had published reports to the effect that four Congress MLAs from the valley districts and another four MLAs from the hill districts may join the BJP.

He said he would also hold talks with the State leaders on the strategy of the March 2022 Assembly elections in Manipur.

Sources said that State Congress leaders had provisionally selected an MLA for the post of working president, as it was likely that the resignation letter of Mr. Konthoujam would be accepted.