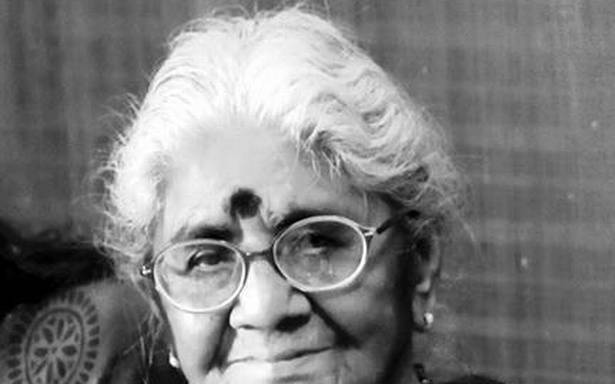 She imbued her works with objective artistic observation, analysis and creative portrayal of day-to-day experiences

Eminent Hindi writer Mannu Bhandari breathed her last on Monday in Gurugram because of age-related ailments, after having led a full and rich life. While her death was not unexpected, she turned 91 in April, it did come as a painful shock to the Hindi literary world that suddenly became ever more aware of the significance of her presence.

A self-effacing person, she chose to speak through her short stories, novels, plays and memoirs and made her presence felt. Unlike many women writers of the succeeding generations, she did not seek recognition as a “woman writer” and the Hindi world accepted her as a “writer”, just as it had accepted Mahadevi Verma and Subhadra Kumari Chauhan earlier.

Hailing from a conservative Marwari family that was progressive in its own way – firm belief in the desirability of women’s education being one of the features – Mannu Bhandari was made to feel inferior on account of her dark complexion. It’s a painful reality that even today Indian society feels the need for fairness creams.

However, young Mannu overcame her circumstances by sublimating them into an inner creative force and gradually emerged as a noteworthy writer.

Mannu imbued her works with an uncommonly objective artistic observation, analysis and creative portrayal of day-to-day experiences that, despite looking mundane, shape our lives.

Mannuji, as she was fondly called, will always be remembered by the Hindi literary world as soft yet firm creative voice, a writer who expressed what she felt and reflected reality in her works as she saw it, not as it should be. Her huge popularity was mainly due to an endearing lack of pretension.

She and Rajendra Yadav were perhaps the first writer couple in the Hindi literary world and blazed a new trail when both announced that they would write an experimental novel Ek Inch Muskan(One-inch Smile). Her penchant for transparency also reflected in the way she discussed her relationship with Yadav, one of the pillars with nayi kahani (new story) movement in Hindi literature, in her autobiography. She is survived by their daughter Rachana Yadav, who is a noted Kathak exponent.

Bhandari’s first novel Aapka Bunty (Your Bunty), published in 1971, firmly established her as a novelist as it very sensitively depicted the tragedy of a child whose parents have divorced and are trying to find new ways of relating to each other and to him.

Her novel Mahabhoj (The Great Feast), published in 1979, was a creative writer’s response to the anti-Dalit massacre that took place in Belchhi and it brought out in sharp relief the corruption, hypocrisy and criminalisation of politics in post-1947 India.

It was later turned into a play and has been performed — and, continues to be performed hundreds of times all over the country. The novel itself has run into 31 editions so far which is quite a record. The year 1974 saw the release of hugely popular Basu Chatterjee’s Rajnigandha, based on her short story Yahi Sach Hai (Only this is the Truth).

Mannu has been the chair of Premchand Srijanpith in Vikramshila University, Ujjain and her autobiography fetched her K. K. Birla Foundation’s prestigious Vyas Samman.

(The writer is a seasoned literary critic)